We held our B2B marketing event, Bigbeat LIVE, on August 2nd. The theme of our 3rd private marketing event hosted by an advertising and marketing agency was ‘Go for it!’ and marketers from all over Japan gathered in Tokyo for the event.

This blog is a report of the second half of the 2nd Stage which was theme ‘organizations change with empathy,’ and was hosted by Takumi Ozawa, Senior Director Adobe Customer Solutions, Adobe Systems Co., Ltd. (You can read the previous report here).

In the second half, we heard from Kyoko Nagafuchi (Nicknamed ‘Gyori’), Marketing Communications, ABEJA, Inc. and a panel discussion with our host and 3 speakers.

Conferences are not just events; they are a corporate strategy. 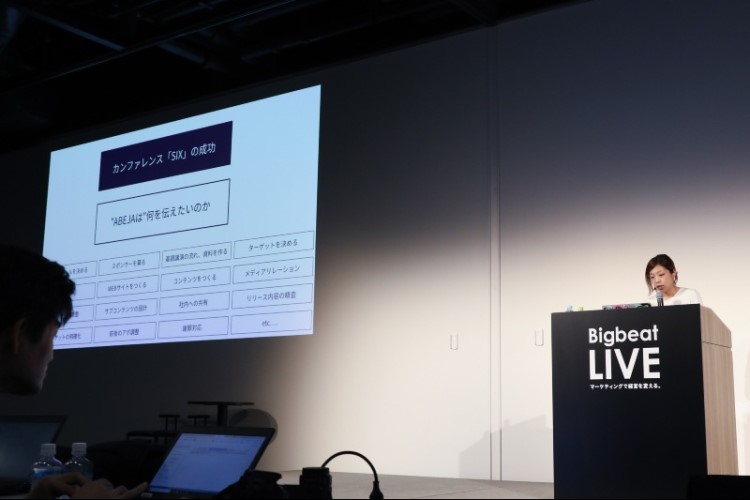 Gyori’s Profile
After graduating college Gyori started at Serverworks Co., Ltd. where she took charge of the marketing department after being a part of the sales department for 5 years. Seeking a new challenge, she found a job at ABEJA Inc., which develops the latest AI and Deep learning technology. She is currently responsible for the marketing of the ‘ABEJA Platform,’ partner company development, marketing strategy, customer support, etc.

Gyori is in charge ABEJA's ‘SIX,’ which is the largest AI conference in Japan with over 5,200 attendees.

Gyori asked the audience, “Companies host conferences in order to get leads, right? That’s what I always thought, but I found out it is completely different.”

When hosting a conference, you have to make a strategy, organize all of the people involved, and plan the content. The people involved does not only mean the attendees, this also includes employees, management, sponsors, a variety of stakeholders, etc. “You build a common understanding with these people and then make a conference out of that. A business conference is not just a simple event, it is a corporate strategy.” (Gyori)

The first conference that Gyori took charge of was SIX 2018 which was where they announced their ‘ABEJA Platform.’ With 18 different sessions, 17 sponsors, 3,000 registers and over 900 attendees, the conference ended in success. But Gyori told the CEO of ABEJA, “I want to be able to call it the best conference in Japan.”

After some research, in order to be the biggest AI Conference in Japan, they needed over 5,000 attendees. In other words, they needed 2.5 times more attendees than their previous year. A BtoB venture company taking on a challenge like this would make anybody’s head spin. 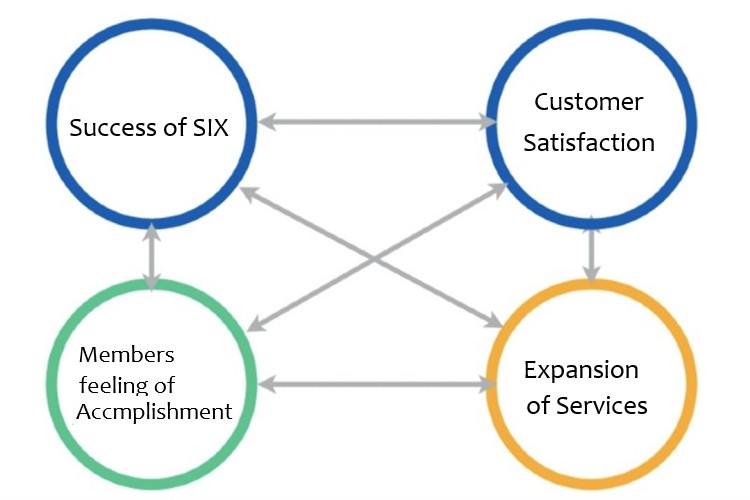 But that didn’t stop Gyori. During the planning of SIX 2018, Gyori put a lot effort into having over 1,000 attendees and to make a place where it was easy for people to get involved and get a lot of feedback from the attendees. Failing to get breach 1,000 visitors, she did not feel a sense of accomplishment. So, for SIX 2019 she was determined to not only increase the number of visitors but also have more and better content.

There were over 60 sessions and 20 sponsors at SIX 2019. Over 8,000 people registered for the event and 5,000 people attended the event. Gyori had succeeded in achieving KPIs that were 2.5 times larger than the previous year. Gyori explained, “But more than the numbers, ABEJA was able to communicate with the people who are manifesting ‘Technopreneurship’ which is a new type of entrepreneurship that uses technology in business to bring about innovations. There was great value in people feeling a sense of accomplishment.”

“If you are able to give your team members a sense of accomplishment by encouraging them, then the services you provide expand. If your services expand, then you customer satisfaction increases, which then leads to SIX succeeding. If SIX succeeds by me using this motivation method, then it leads to a positive cycle.

How did Gyori motivate her team to work in this way? She increased the number of members working on the conference, added content that people where interested in, and passed off smaller tasks that were in the backlog (project management).

Despite this there were a lot of people who it did not work on. So, out of the 70 original members, Gyori focused on 3.  By continuing to motivate the 3, other people who supported those 3 appeared both in and outside of the company and the circle of people who shared empathy together grew.

“I got almost no internal feedback after SIX 2018. But, after SIX 2019, I received a lot of feedback, both positive and negative from employees at ABEJA. Of all the feedback I received, the best feedback was from one of the 3 people that I worked with on the project. They told me ‘This sense of accomplishment has made me want to do more.’ This one sentence gave myself a huge sense of accomplishment” (Gyori). 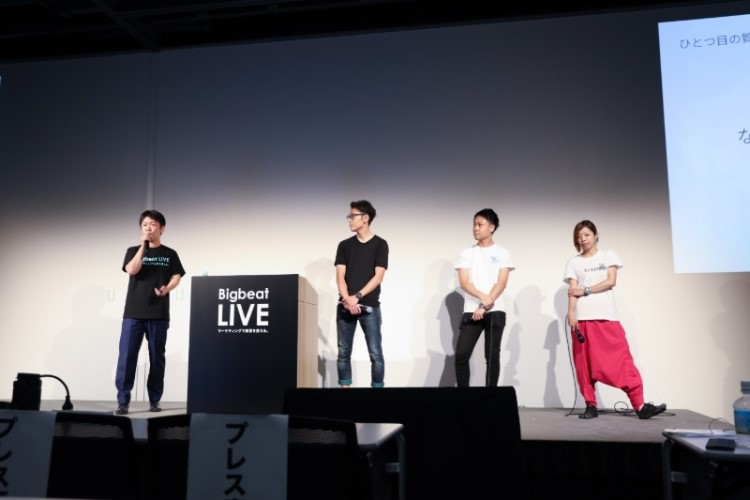 Gyori’s message:
Empathy and Resonance
“Instead of trying to do everything and be greedy, look for places where you, your partners, and your stakeholders can empathize with each other and put effort into that. This creates empathy and spreads it. And the thing will become even stronger and bigger. Never give up!”

Being a change leader means being able to make change, even from small things 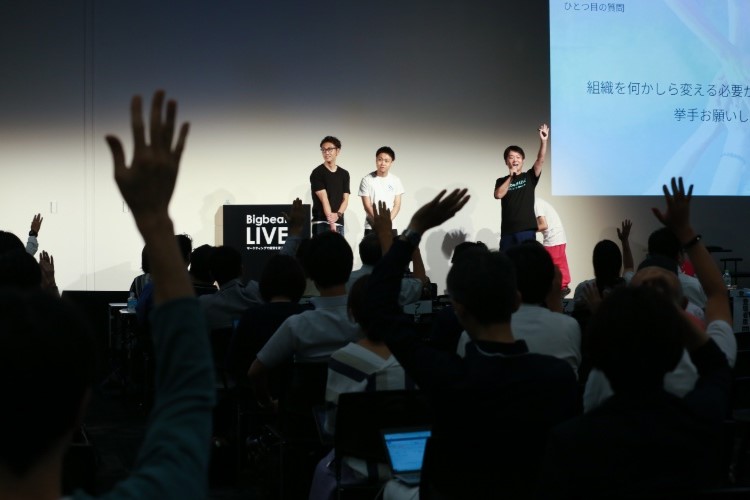 To end our 2nd Stage, our host, Mr. Ozawa, took the stage with the 3 speakers and held a panel discussion. Mr. Ozawa started the panel discussion by asking the audience, “Who thinks there is something about their organization they want to change? Please raise you hand.”

He asked 2 people among the many in the audience that raised their hand want about their organization they wanted to change:

・I think my company has started to only do the same things over and over. The will to try new things is decreasing.
・My organization is becoming very vertical oriented and there aren’t enough connections and communication horizontally.

Mr. Katayama responded to these challenges by talking about his own experience. “I personally think that the recruitment industry is also becoming stagnant and does the same thing over and over. So, I have been working with a variety of companies to try and change that. But just saying ‘I think it should be this way’ didn’t produce any results. That’s when I started to use books. I would tell my superiors that they should try reading books that I thought were really good. I finally feel that things are starting to change little by little.” (Mr. Katayama)

Mr. Tanaka works at Freee, an IT venture company where changes happen quickly partly due to the nature of the industry. He gave this advice to our audience.

Gyori didn’t think that a company being stable in its activities was necessarily a bad thing, but the reason why you feel it is bad is important. “I am the type of person that’s seeks change and freshness, even in romantic relationships. I don’t think stability is necessarily a bad thing. But if you are not happy with the way your company works, it is also important to considering changing jobs. There are a lot of companies out there looking for people and you shouldn’t be afraid to consider that option.” (Gyori)

If you want to change your organization through empathy, the first step is action! 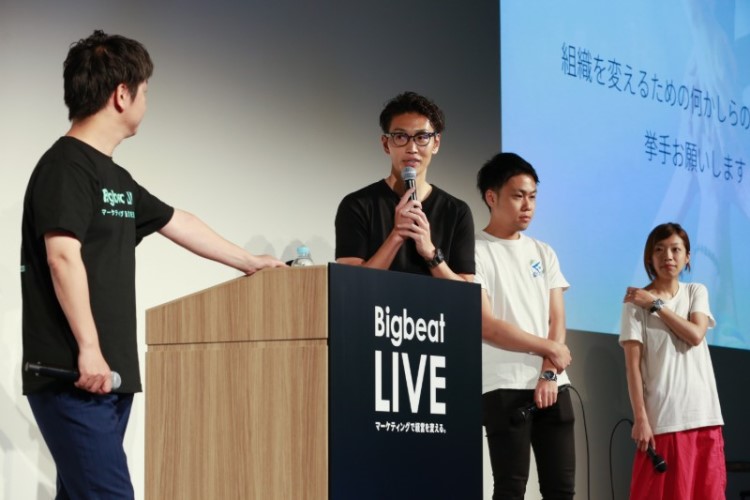 Mr. Ozawa next asked the audience to raise their hand “if you have taken some kind of action to change your organization.” “I think that if you are going to try and change your organization it is necessary understand the gap between you and the person you are talking with about the change. Then you need to convey yourself in a way that fills the gap between you two.” He then asked our speaker Mr. Katayama, “have you ever experienced something like this?”

5 days after entering en world, Mr. Katayama was the only person in the marketing department. He reported directly to the executives of his company. He talked about it during his presentation, but he would often go out to lunch with people from the sales department. During these lunches he discovered that there was a gap between his point of view and the company’s. He felt the need to ‘change something.’ “But my approach didn’t work very well, and I couldn’t convey myself properly. I think in order to understand the situation of the person I am talking to and to convey myself in a way that fills the gap between us, I think I need to put myself out there more. I think if I had a time machine, I would go back to college and really study marketing one more time.” (Mr. Katayama)

Gyori answered the question, “I talked about before during my presentation, but if you live everyday thinking there is a gap between you and the person you are talking too, then life becomes easier.” Mr. Ozawa strongly agreed with this sentiment. “As someone who works at an internationally owned company, I really agree with what you are saying. If you become upset at a gap existing between you and someone else, it will be impossible to live. It is necessary to think about it as an opportunity. There was a time during my job in change management that a big incident occurred, and I had to apologize to customers every day. It was not easy but when I felt like giving up, I didn’t think ‘oh no it is so hard to have all of these customers made at me.’ I thought ‘this is a perfect opportunity for me to learn what troubles the customers are facing.’ Through that I was able to ue the chance to learn.” (Mr. Ozawa)

Next, we received a question from the audience targeted at Mr. Tanaka.

Q. When you were faced with the crises that you team was going to be dissolved, how did you explain that? Did you use numbers or did try to give an explanation using emotion and empathy?

Mr. Tanaka explained that it is important to build a roadmap during crises like this. “It takes a lot of time until your community is able to output easily understood information. So, I made a roadmap to show what our goal was, and what we were doing in order to make sure that we succeed in our goals. I showed this road map to my superiors” (Mr. Tanaka)

In his last remarks, Mr. Ozawa summed up the 2nd stage.
“Our theme was ‘organizations change with empathy.’ I think that for the amount of people who feel like they need to change their organizations, the amount of people who have actually taken action to start that change is really small. After listening to these change leaders, I hope that you go out and use empathy to start changing your company. Next year when we ask the same question, I want to see at least half of the hands go up. If they I will feel that we had value speaking here today. Thank you very much.” (Mr. Ozawa)

You can read the next stage 'establishing the core role of a marketer' here!
Below, you can read another stage reports;