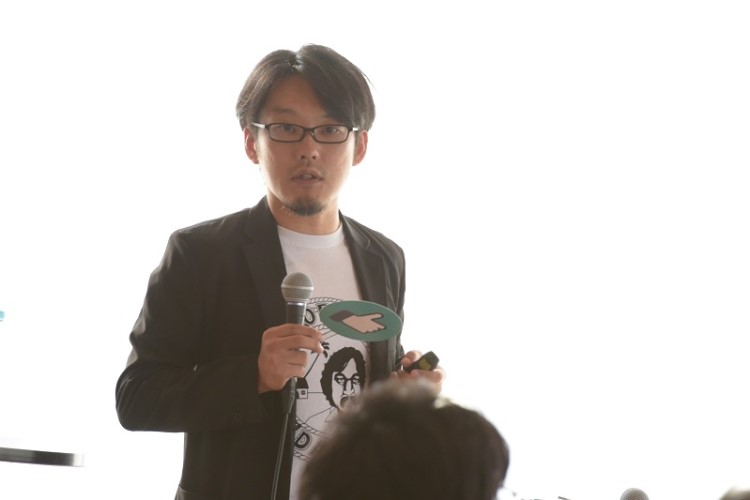 This is a report of the first part of our Special Stage, the “Local Stage”, focused on “Think Local”.

Our CEO, Yutaka Hamaguchi, opened the session saying, “If you change your management through marketing, the future will get better, and everyone will be happy. I want this session to become a starting point for us to improve our local area through marketing”.

Mr. Hibiya’s Profile
After having graduated from Keio University, Faculty of Environment and Information Studies, Mr. Hibiya was hired at NTT Software Corporation. He joined SanSan Inc. and engaged in Marketing and Public Relations.  Currently, as a “connector” and “evangelist”, he is actively transmitting information while working at multiple companies and projects.

Mr. Hibiya thinks governments and local communities need innovation to solve the current problems they face.  “In my experience so far, rather than only having people in a specific area tackle an issue in that area, it is much more effective to have a variety of people tackling the issue. I think it is important to have people from multiple areas bouncing ideas off of each other. They have a better chance of finding to some clue to help them solve the issues.  Today, I would like to talk to people who are embodying this concept”. In this way, Mr. Hibiya introduced our  3 speakers who are currently working to solve the social issues that previously did not exist the government environment before. 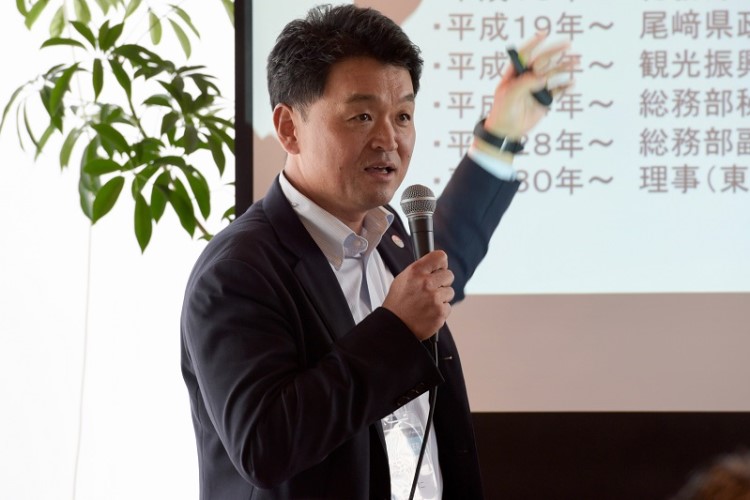 Mr. Okimoto’s career was not only cultivated in the Kochi Prefectural Government only. His background is quite unique. Not only he worked as Government Official, but also, he had experience in a Game Software Company, Square Inc. (currently, Square Enix Co.,Ltd).

“I want to talk about how marketing approaches are effective in solving the current situation and issues faced by local areas,” Mr. Okimoto began explaining about the current problems faced by Kochi Prefecture, which is an “aging prefecture”.

Indeed, Japan is currently facing a severely low birthrate and aging population, especially in rural areas. Mr. Okimoto explained that, this issue reached a tipping point in Kochi prefecture around 15 years ago, the decreasing of population is resulted into a severe decline of the economy.

There are the following two strategies to overcome this situation.

•    Increase the number of tourists and immigrants;
•    Acquisition of “foreign money” from outside the prefecture and overseas by
selling local products. 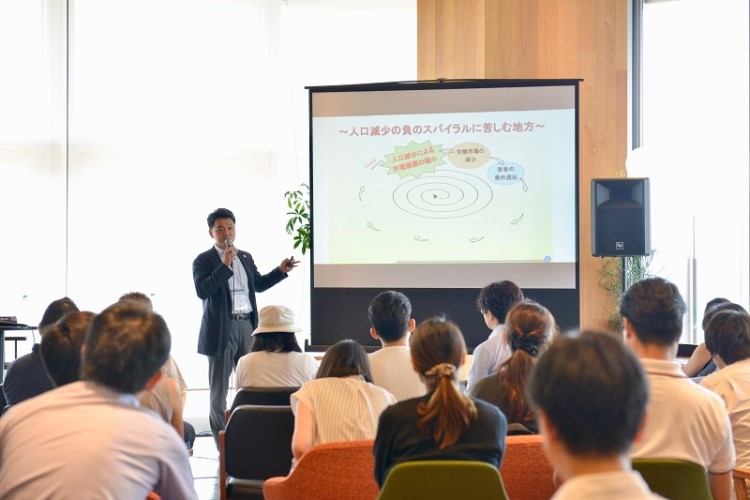 Although both have begun to produce results, there are still challenges to reaching a sustainable development.

Mr. Okimoto said, “Even if the administration is enthusiastic about the P and D activities of the PDCA circle (Deming cycle), there are still a lot of A and C activities that need to be done” and cited limited personnel differences as causes.

The personnel in the government changes every 3-4 years. As a result, it becomes replacing the signboards, but not the content”. Mr. Okimoto believes that the root cause is that marketing philosophy has not penetrated into the conscious of the government. Specifically, it seems that the issues lays in "not grasping the needs", "having a product-out idea of self-reliance", "having the concept of public relations but no concept of advertising”, and "unclear target". Defining the final target seems to be a particular point of conflict in the government where “equality” is supposed to be held up. So, there has been a lot of resistance in defining the target.

However, “we must change our attitude about treat everything uniformly”.
People have to choose Kochi Prefecture from a wide number of other prefectures. For this reason, Mr. Okimoto explained, “It is necessary to continually improve marketing research, advertising activities, and verification of effectiveness,” If this is not possible, the P and D will continue, and the current crisis will continue”.

Mr. Okimoto’s speech ended emphasizing that marketing is indispensable for solving social issues that the government is currently tackling.

“Anyone is fine” is not  an appealing strategy!

Our next speaker was Wakako Kawajiri, the leader of a unusual department for the government to have: the Marketing Department of the Nagareyama City Hall, in Chiba Prefecture. 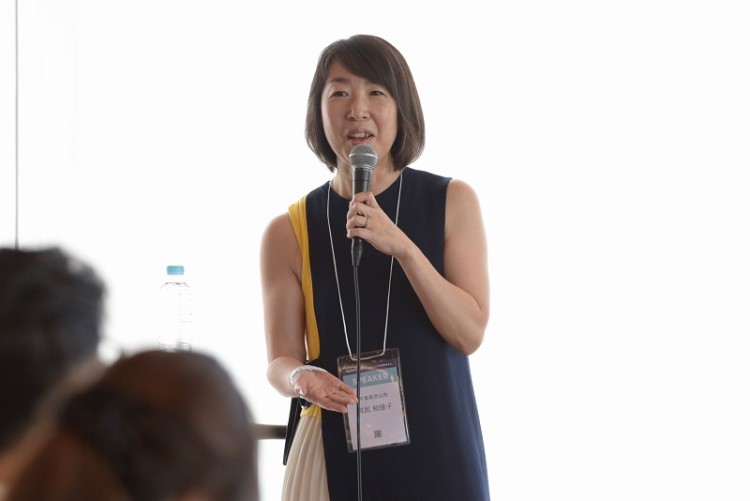 Ms. Kawajiri’s profile
Ms. Kawajiri has been engaged in sales and marketing for 14 years at a private company. She loves Nagareyama city, where she lives, and wants to keep it alive. Ms. Kawajiri applied for a position in her local government city office and started to working in the local government marketing field. She worked on the promotion of “If you become a mother in Nagareyama City”, which was a hot topic in the Tokyo metropolitan area, and the “March of the Forest” that attracts over 120,000 people every year. She is also the founder of the “Civic Power Battle”, a presentation battle held nationwide that gives people the chance to spread love for their city.

Ms. Kawajiri is currently working on several unique systems to attract attention to the city. For instance, she was in charge of an advertising campaign, characterized by this catch: “If you become a mother in Nagareyama City”.
Ms. Kawajiri was hired in Nagareyama City, Chiba Prefecture in 2009. Before, she was worked in marketing at TEPCO (Tokyo Electric Power Company Holdings, Inc.), where she oversaw data analysis. When she arrived in TEPCO, the marketing department had only been established 4 years before. She remembers that at the beginning, her work was quite difficult because she had to tackle with a lack of budget and people and the “I don’t understand the importance of this very well” attitude. She said that it took a lot of time to reach a sense of rewarded in this kind of environment.

Ms. Kawajiri thinks that marketing consists of “all the activities that create business and sale mechanisms”, which cannot happen before there is awareness. So, what Ms. Kawajiri did eccentric things activities to get the attention of the media and build an awareness of Nagareyama City.
All these activities were aimed at increasing the permanent population in the city, and targeted at working parents with children living in the Tokyo metropolitan area. 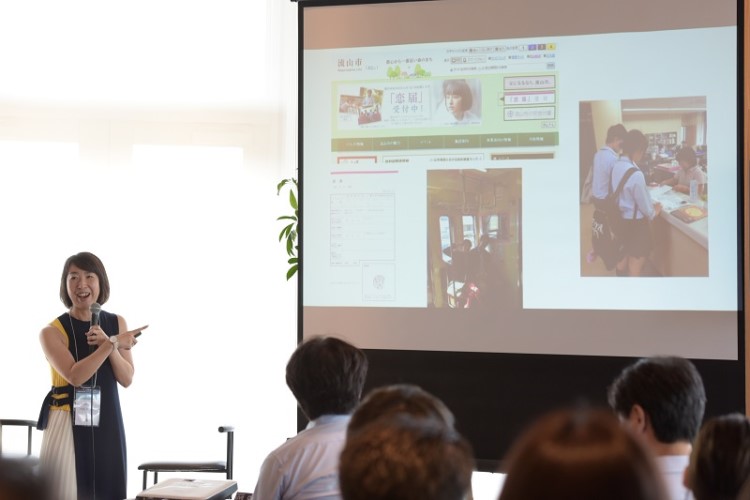 As the administration should be equal and has to public invest money, it is very important to clarify the target of the advertising campaign, explained Ms. Kawajiri to the audience. Raising awareness is important, but Ms. Kawajiri also explained, “It’s not good when just anyone comes here. And it’s not good trying moving people though subsidies. How can I make you like Nagareyama City and how can I make you want to live here?”

The keyword for Ms. Kawajiri was “empathy”.

That is the reason why, the advertising campaign appealed to the sympathy of that generation of working parents with children living in the capital city. The message of the campaign was well received indeed, but Ms. Kawajiri noticed big oversights in it. She had forgotten to take the people who were already living in Nagareyama City into account because she was eager to attract the defined target in the city. Her mood soon changed from disappointment to dissatisfaction. The city was not exactly the easiest environment for raising children.

She was afraid that the citizens would reveal that “the advertisements are good, but when you actually come to live here it is not that fun”. So, she started focusing on “inner marketing”, in order to warm o change the opinions of the residents.

One example of this was the “Civic Power Battle,” which explains through data the appeal of the city from the point of view of the citizens. In addition they launched and started a project to create co-working spaces led by citizens to bring business to the city. “If you love the city where you live, you can create a self-sufficient system driven by the citizens themselves. It took around 5 years to do it”, said Ms. Kawajiri. However, the responses from outside to these measures could almost be seen immediately; on the contrary, it took more time for the leaders to realize the positive effects of their efforts.

The last speaker for this session was Testuya Uchida, Planning Director (Media and Brand Communication) of the Nagano Prefectural Sales Headquarters. 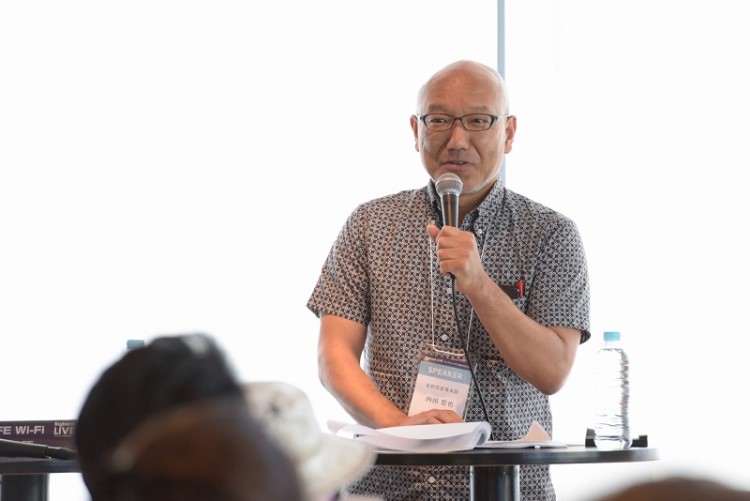 Mr. Uchida’s profile
Mr. Uchida was hired at Fujitsu Ltd. in April 1993. After 5 years in local sales, he move to the advertising department located in their headquarters. Since then, he has been involved in advertising, promotion, and marketing for about 20 years. In the April of 2019 he started his job in the Nagano Prefectural Government where he was appointed the Planning Manager of the department, in charge or media and brand Communication of the Nagano Prefectural Sales Division.

Mr. Uchida left his job at Fujitsu Ltd. in March 2019, where he had been working for 25 years, and he got a job in the Nagano Prefectural Sales Headquarters. The division was established with the goal of improving Nagano’s “earning power” and “brand power” by communicating the merits of the prefecture’s products to the reest of Japan and overseas.  Even if Mr. Uchida accumulated a lot of experience at Fujitsu Ltd., he talked  about the struggles he has  been facing since he started in the spring of 2019.

Currently, Mr. Uchida is focusing on “establishing the identity of Nagano Prefecture”. Mr. Uchida explained establishing an “identity” on an organization will eventually sublimate into philosophy that will become the base people work on. 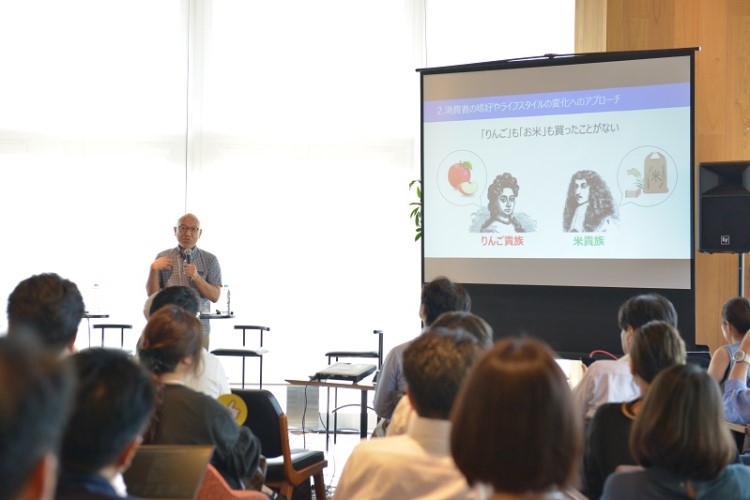 “If they do not understand their “identity”, no one will become a fan of Nagano prefecture. They have to understand that, if they you always remain inside your prefecture, it is very difficult to obtain an objective point of view”. In this way, Mr. Uchida explained that as they conducted market research on potential consumers outside the prefecture, the local government staff exclaimed “Uchida has never sold apples or rice in his life”. But without knowing the feelings of your consumers, how can you develop new markets or suggest people from other prefectures to buy your products? Mr. Uchida claimed, “To increase sales opportunities, you ned to put yourself in the shoes of the consumer.”

Undoubtedly, there are weaknesses in obtaining the relevant information needed for decision making and action, to reveal the core of the issue, and to develop concrete measures that match the actual situation.
So, Mr. Uchida visited the farmers and artisans in order to listen to the real voices of the residents.

For instance, in the case of artisans, the lack of successors is a common concern in many regions. The reason is that it takes more than 10 years for an artisan to become an actual craftsman. However, when Mr. Uchida unexpectedly found that young people were very ambitious, but they are running into obstacles created by elder people. To overcome this problem, new measures need to  be taken, such as creating a common place to support young people financially and technologically, as well as organizing events or exhibitions to promote the prefecture.

Mr. Uchida is still working to get the prefectural government staff to look at Nagano from the consumers’ point of view.”.
“I have a lot of hard work to do, but I don’t want to be afraid to take the first leap towards change.” concluded Mr. Uchida. 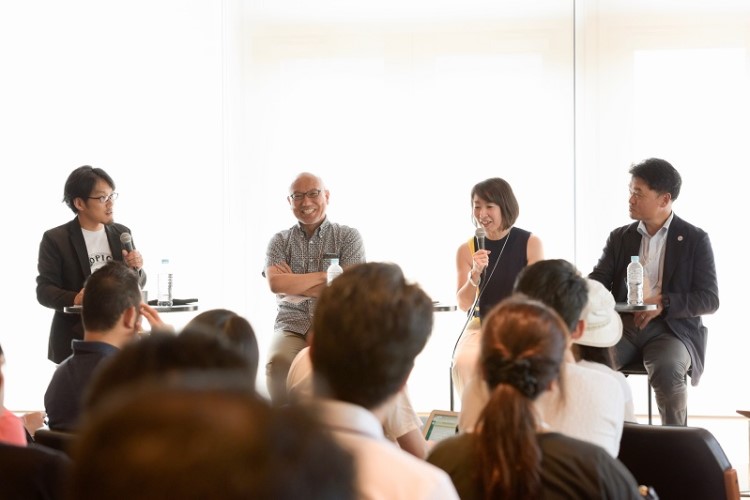 The second part is a panel discussion held between the host and the three speakers. The theme of the talk is “How can administrations use marketing?” and “Which measures should be done to make migrants choose your city?”.

You can read the next part here!
Below, you can read another stage reports;