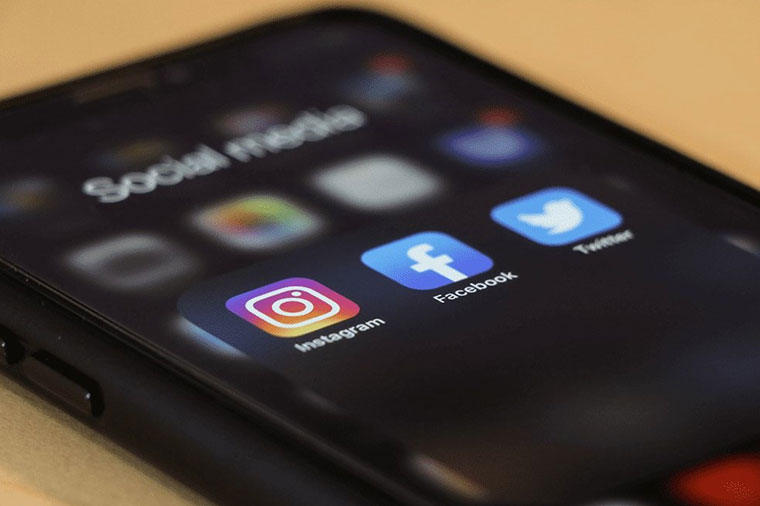 Photo by dole777 on Unsplash

According to the Digital Report 2020 by We are Social, published in partnership with Hootsuite, more than 4.5 billion people now use the internet, while social media users have passed the 3.8 billion mark. This trend also suggests that more than half of the world’s total population will use social media by the end of the 2020.

However, the social media penetration differs a lot from a country to country. This is why you should consider and analyze be aware of the digital and cultural situation before setting up your social media communication strategy in a foreign country.

If you are interested in developing a social media communication strategy in Japan, you may already know that it is a very particular country with a unique marketing situation. This is also true for is social media use.
Especially, during Covid-19 pandemic, Japan's Digital sitaution is completely changed and so the behaviour of Japanese people towards Social Media does. If you would like to learn more about Japan's digital transformation in 2021, check our post out!

In this article, we will discuss the social media situation in Japan in 2020 and how Japanese culture affects the use, popularity, and engagement on Social Media. 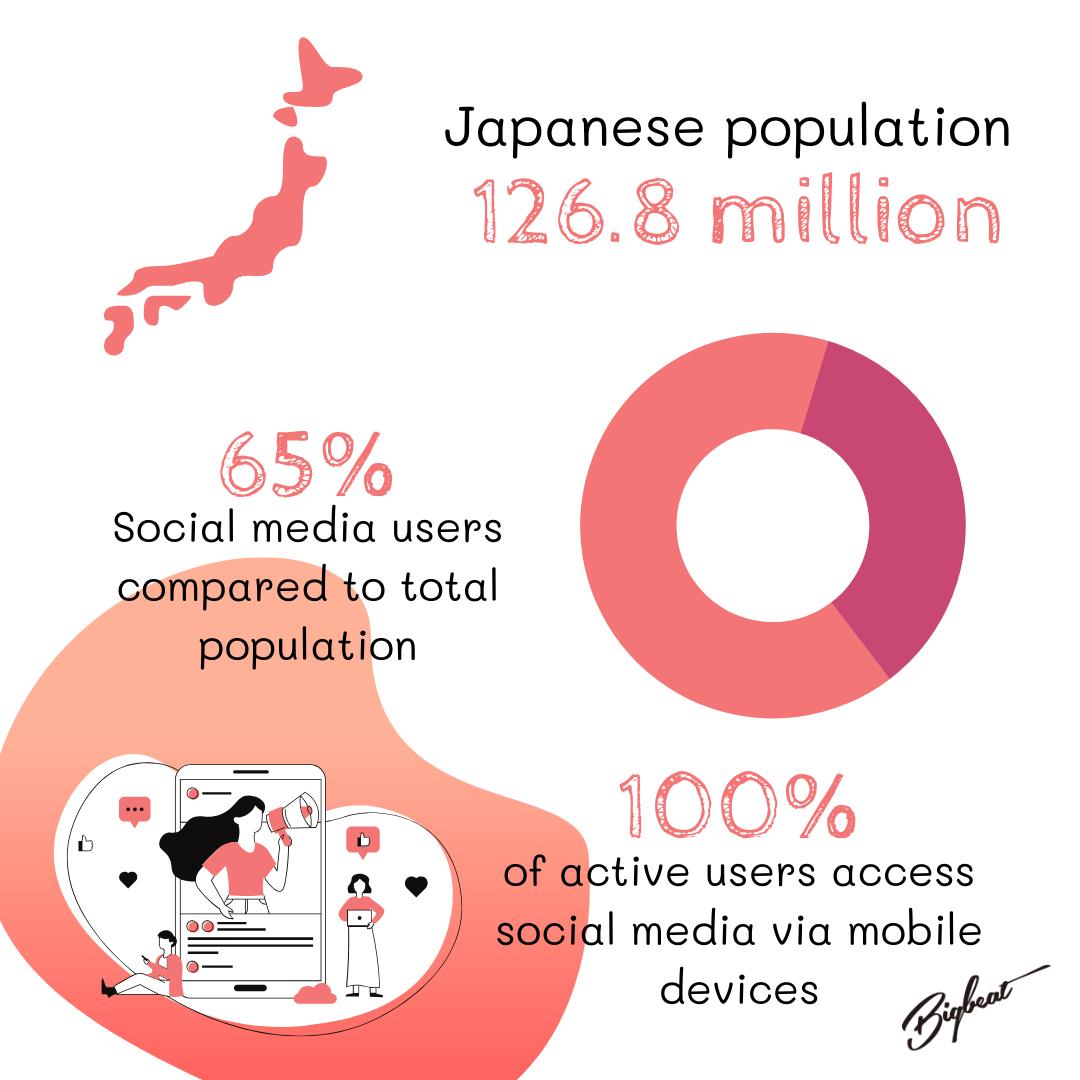 In regard to social media behavior, Japan is at one of the lower positions compared the global average. For instance, the average amount of time spent on social media is just 45 minutes, far less than the global average (2 hours and 24 minutes). While 88% of users said to have visited or used Social media or messaging service in the past month, only 76% actively engaged or contributed to them.
Last but not least, only 15% of Japanese social media users uses social media for work purposes (global average: 43%).

If you have tried to search your Japanese business partner or client on LinkedIn, you have probably noticed that you could not find him/her. The same for their company page. 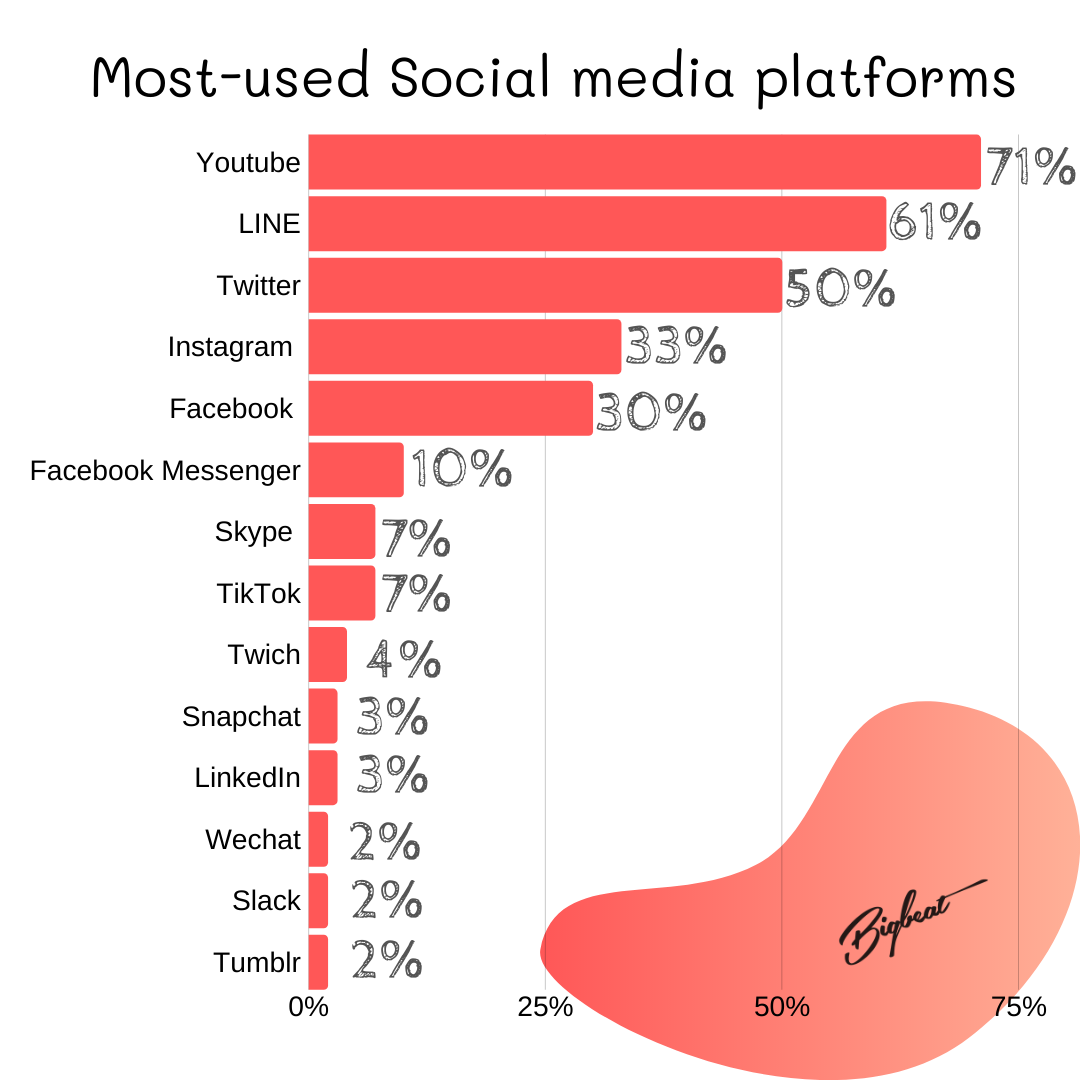 From a B2B point of view, LinkedIn, the leader of the business social media platforms, and Slack, the most popular instant messaging platform among corporate teams, are used respectively by 3% and 2% of the Japanese internet users.
So, where should I connect with my Japanese business partners and clients? The answer is Facebook. 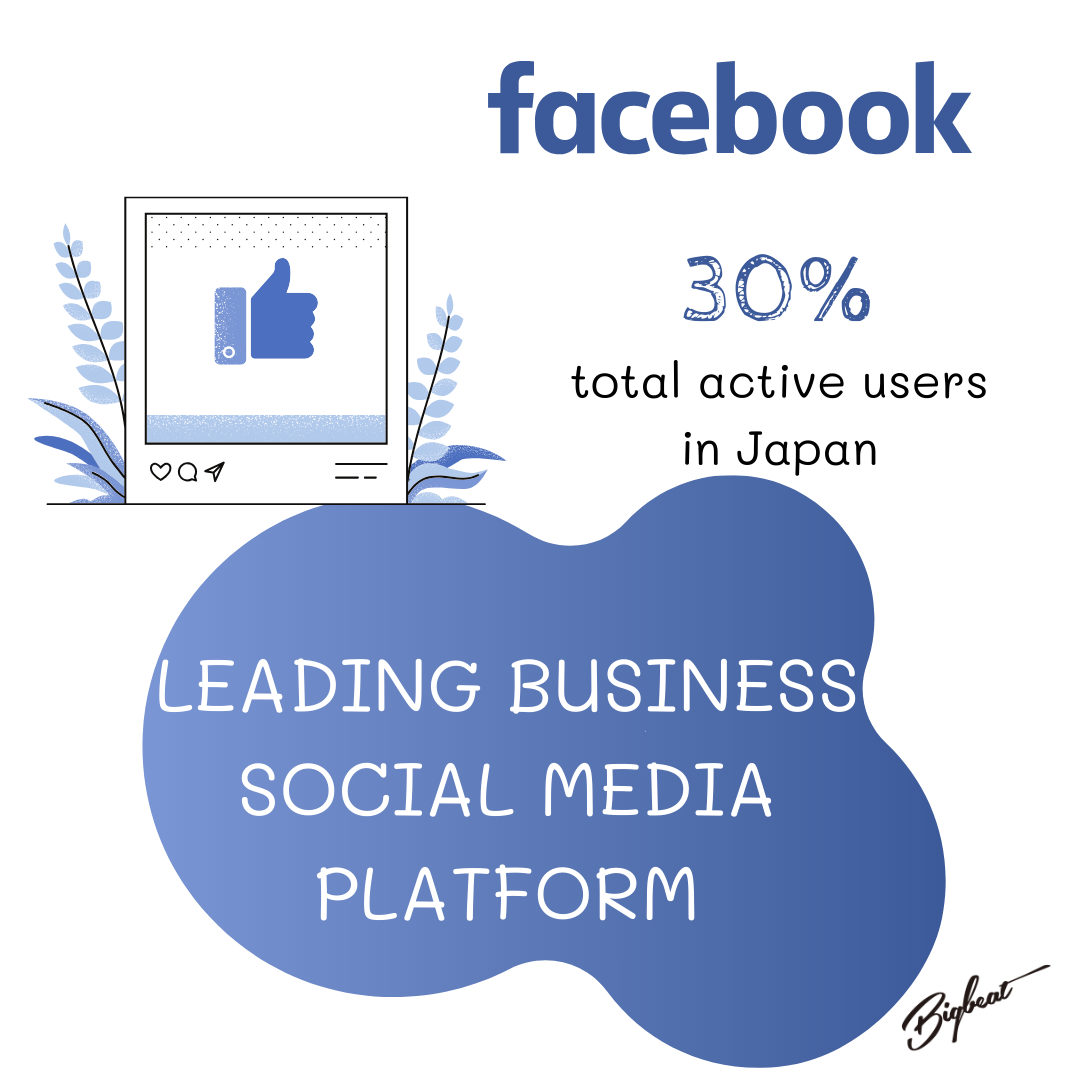 Facebook, the most-used social network in the World, has 2,499 million active users every month. In Japan, accounting for 30% of the total active users, is the leading Business Social Media Platform.

Go to any networking event in Japan and nine times out of ten, after having exchanged your business cards, you will end up with a lot of mutual friend requests on Facebook as oppose to LinkedIn. This is why Facebook is the right place to develop your B2B marketing strategies and digital advertising strategy.

Survey data on demographic suggests that Facebook in Japan is mostly masculine: 51.7% of the users are male, while 48.3% are female.
According to a 2019 report from Gaiax SocialMediaLab, Facebook’s active users are from 30 to 50 years old, with a noticeable drop in use by young women in their teens and twenties. So, Japanese people tend to see Facebook as a more professional network compared to Twitter and Instagram. This could be why Facebook has become the mature social network of Japan.

Also, while engagement on Facebook could be considered quite low, the CTR is high. For instance, in Japan, while the average  number of Facebook pages liked, and the number of comments is just 1, the average number of click on Facebook advertising is 6 (8 for female and 5 for male).

If you are considering opening a corporate page on Facebook for your Japanese target, you may be surprised by the following data: 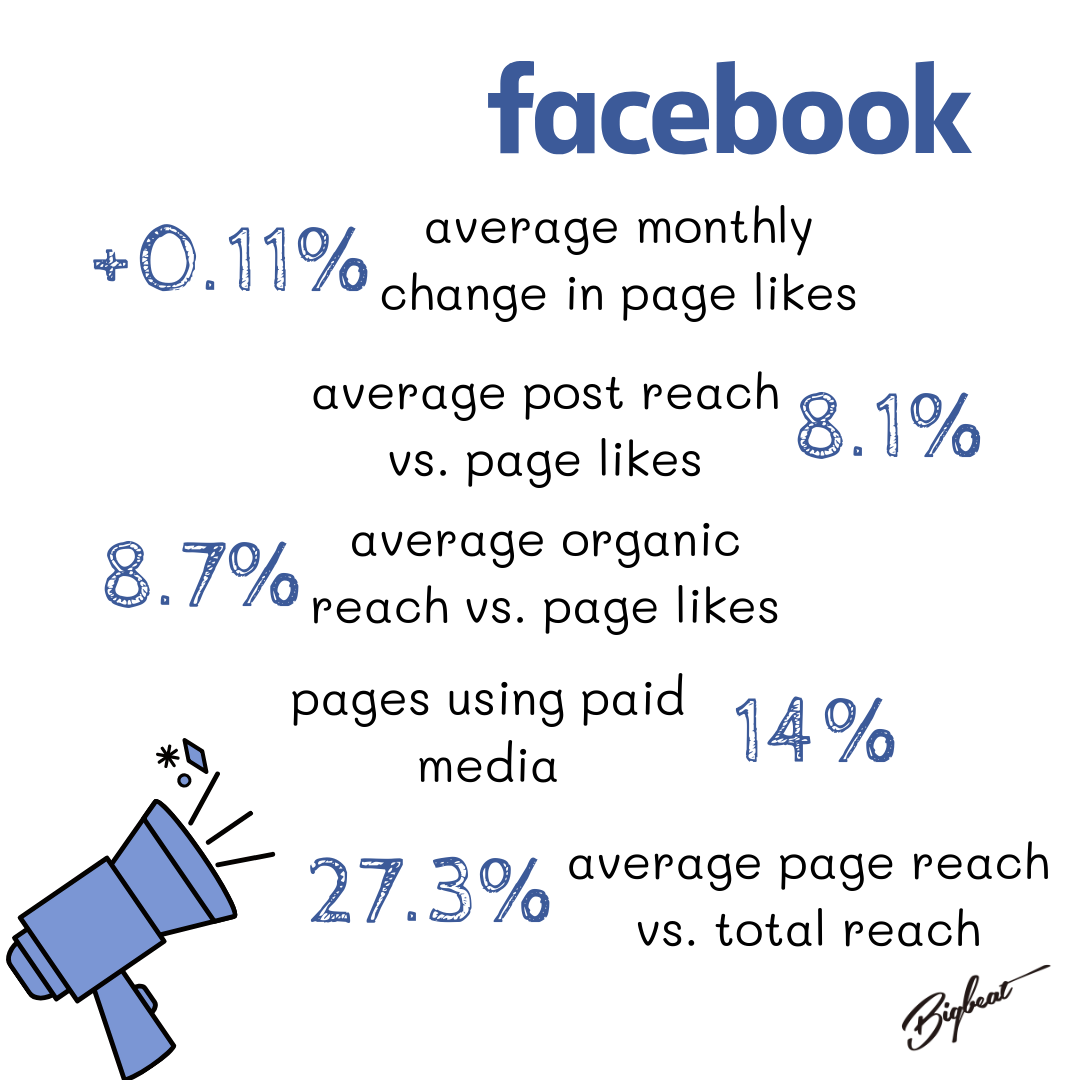 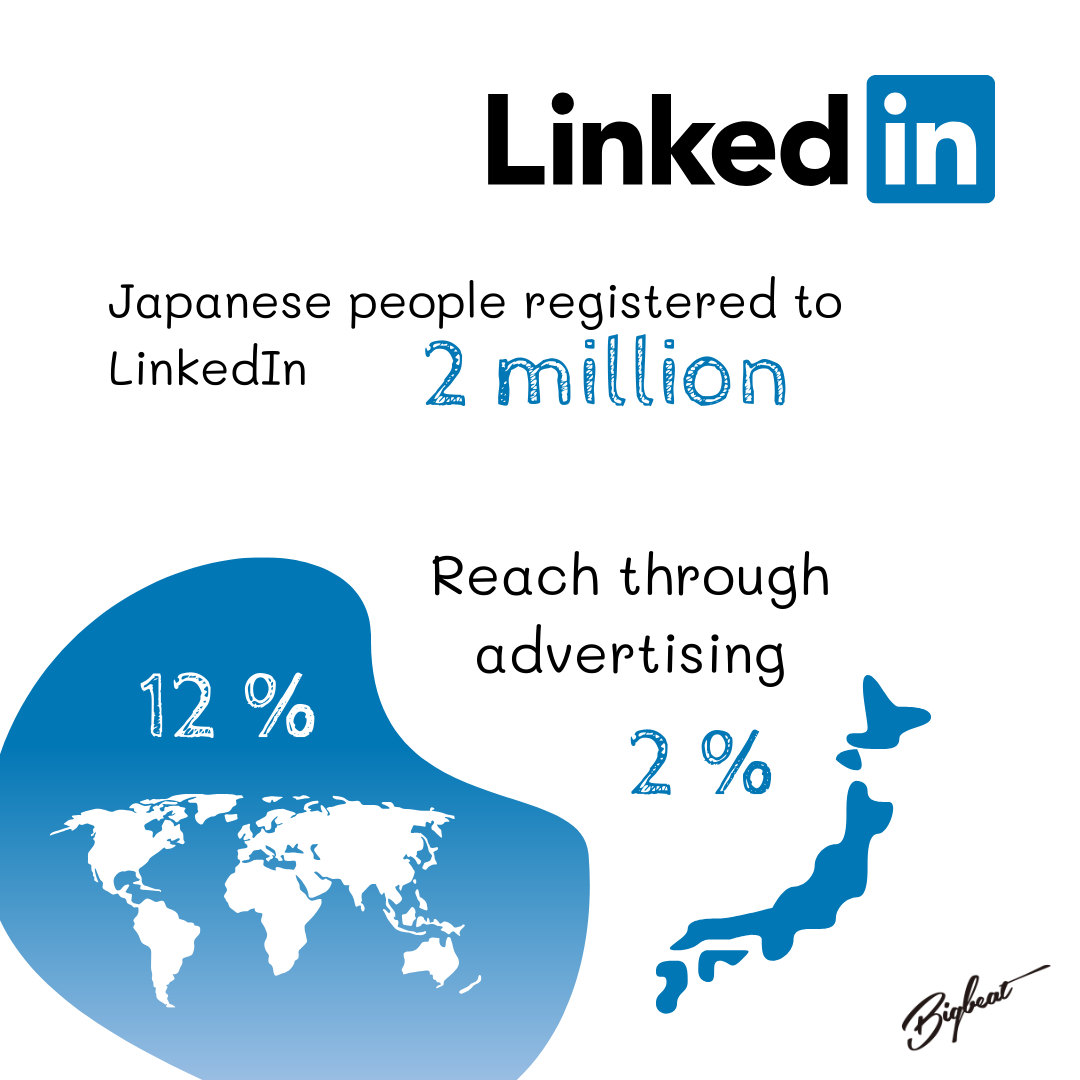 Surprisingly, LinkedIn is not very popular in Japan. 2 million Japanese people are registered to the leading social media channel for B2B marketers, divided into 50% women and 50% men.

The probability of reaching a Japanese audience through advertising on LinkedIn is just around 2%, the lowest compared to the Global average (12%), even with its recent growth to 4.2% compared to the last quarter.
So, if you want to develop a social media strategy in Japan, we advise against doing it on LinkedIn, but focusing on Facebook instead. 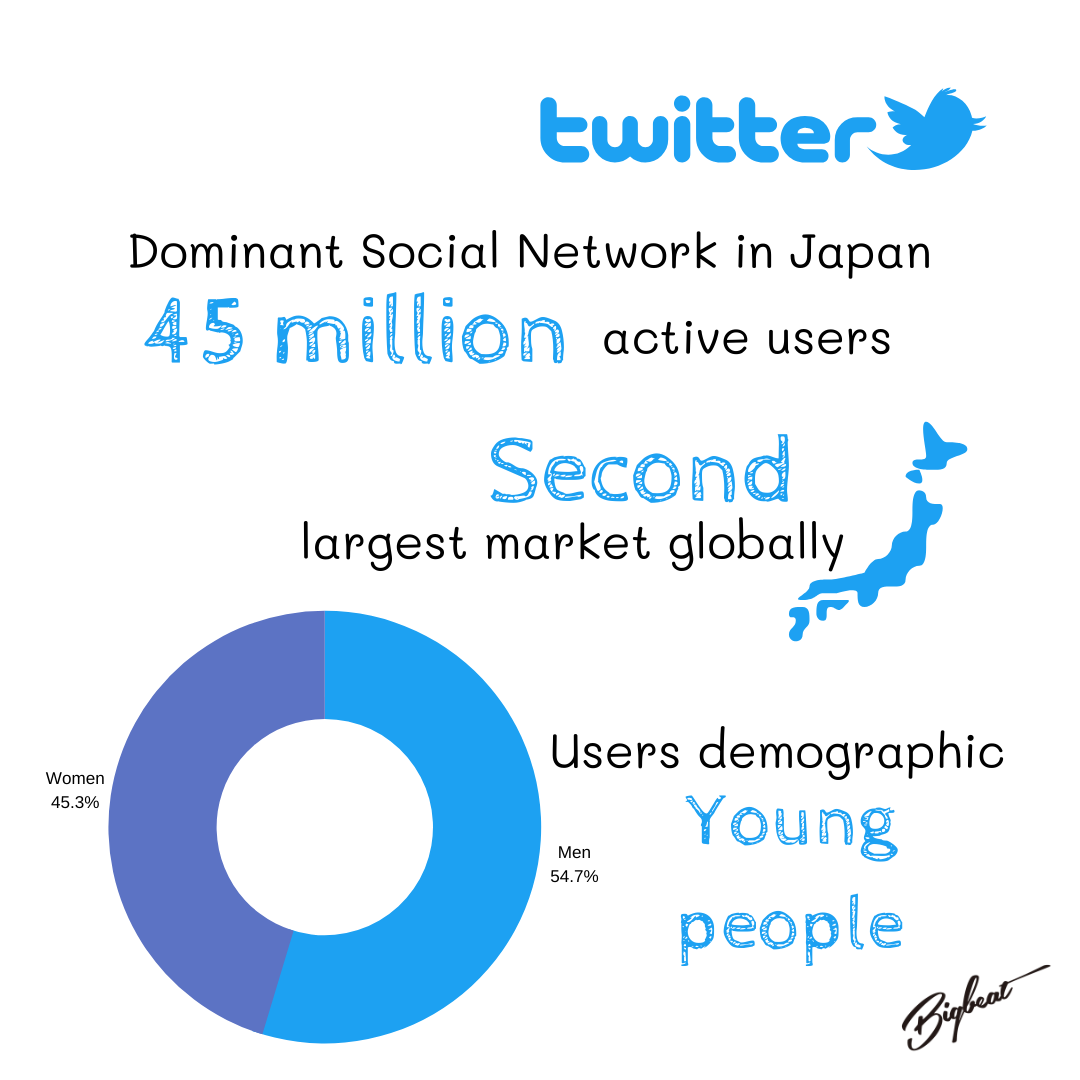 Twitter is and has been the dominant social network in Japan for a long time. With over 45 million active users, Japan is Twitter’s second largest market globally, behind the US and followed by the UK.

As for Facebook, Twitter demographic data tell that 58.7% of Japanese men and 48.7% of women use regularly Twitter.
Even though advertising reach has decreased compared to 2019, it is still at 40%. This is a huge potential for brands who wants to reach a Japanese target rapidly.

However, if your target is B2B, there is some bad news. Although the growth rate of users seems to have ceased, Twitter is still an SNS that is still supported mainly by young people in their teens and 20s.

Nevertheless, because of anonymity, users use Twitter to show their true feelings and opinions towards brands, products, and services. So, for marketers, it could be still a good means for social and brand listening. 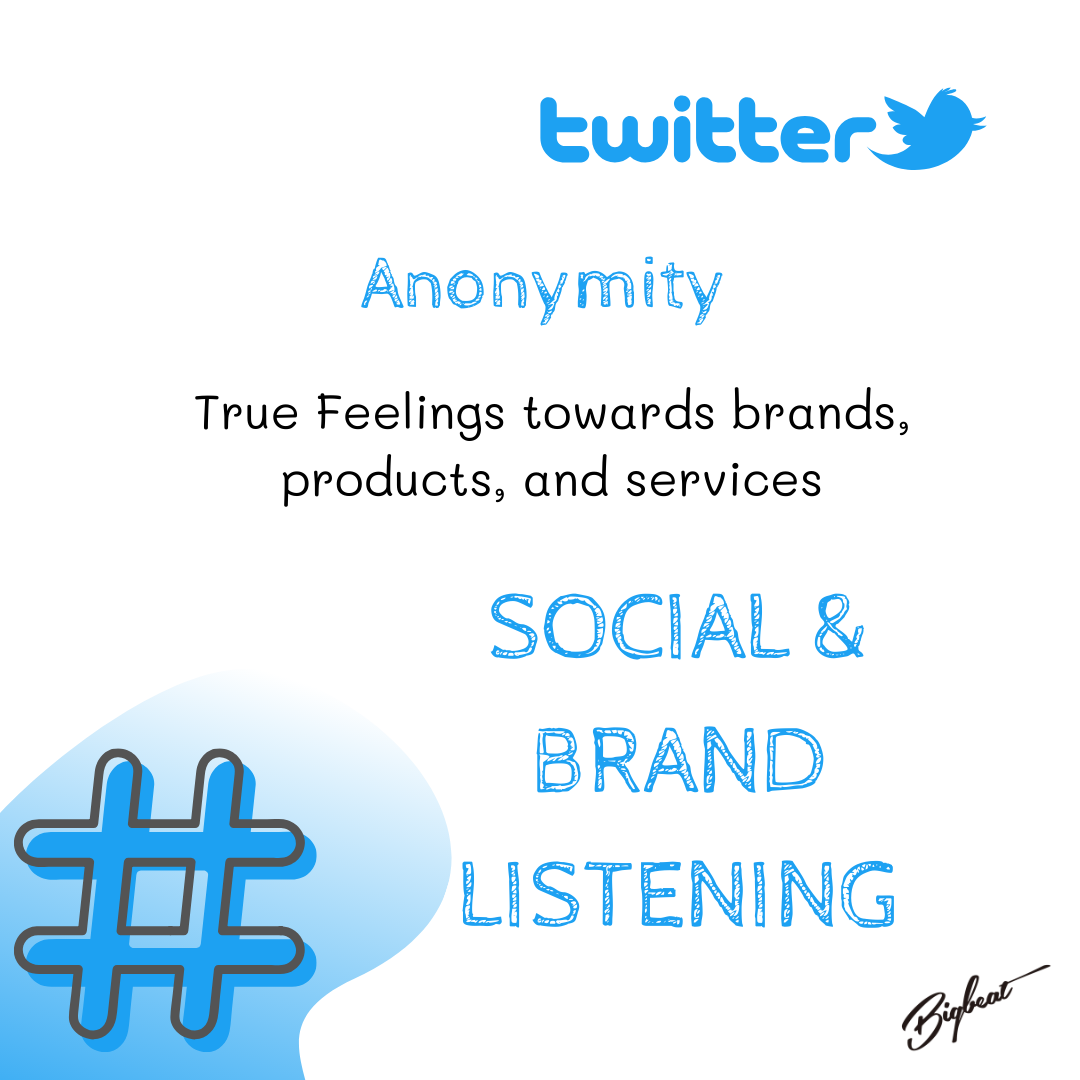 Overseas, some B2B companies are beginning to use Instagram, especially Instagram Stories or IGTV, for brand promotion.
So, why not to replicate this strategy in Japan? Let’s analyze some data, first. 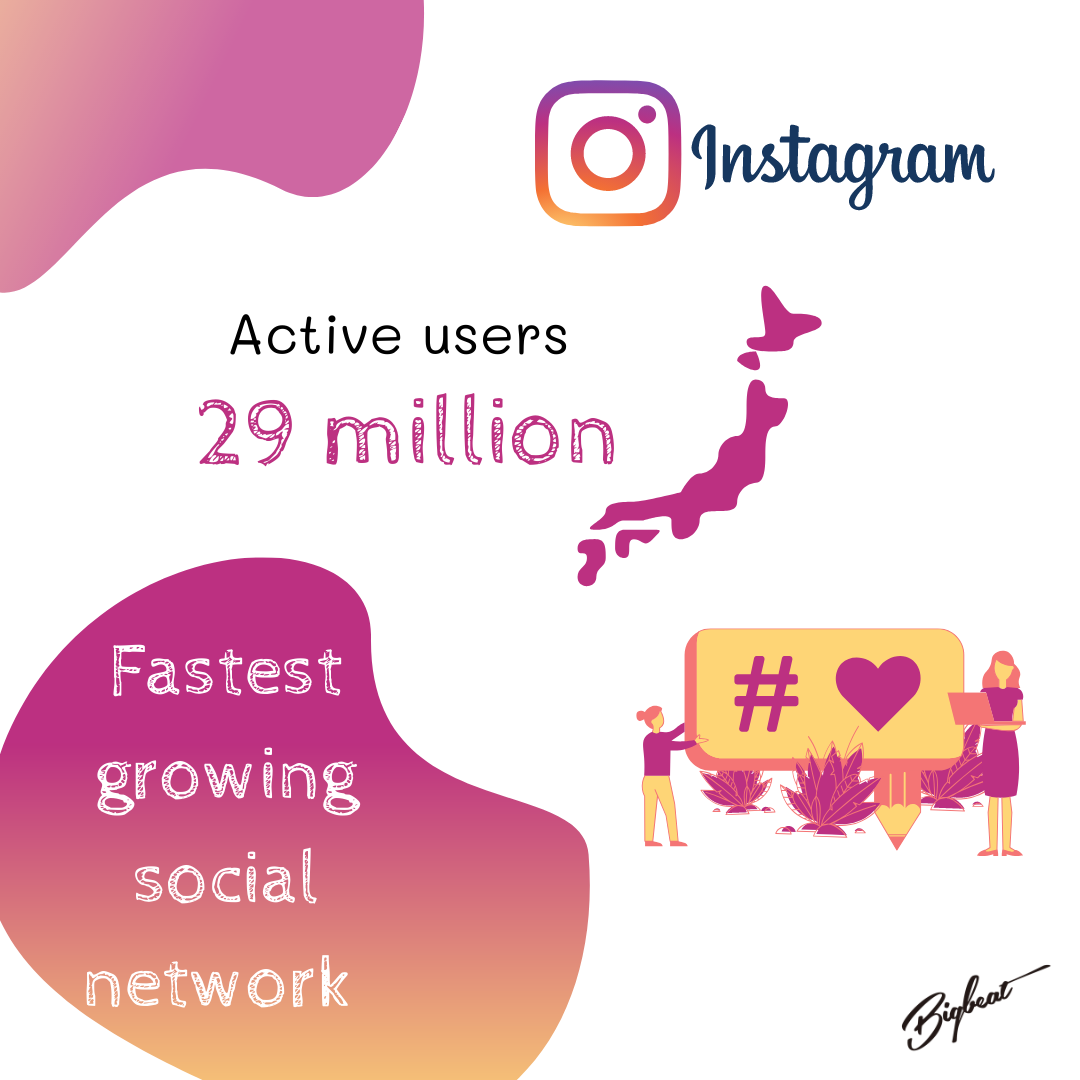 In Japan, Instagram’s has 29 million users, nominating it as the fastest growing social network.
Over 50% are women, while less than a half are men, but surprisingly growing. Also, Instagram’s audience is quite young, and the average user is around 30 years old. 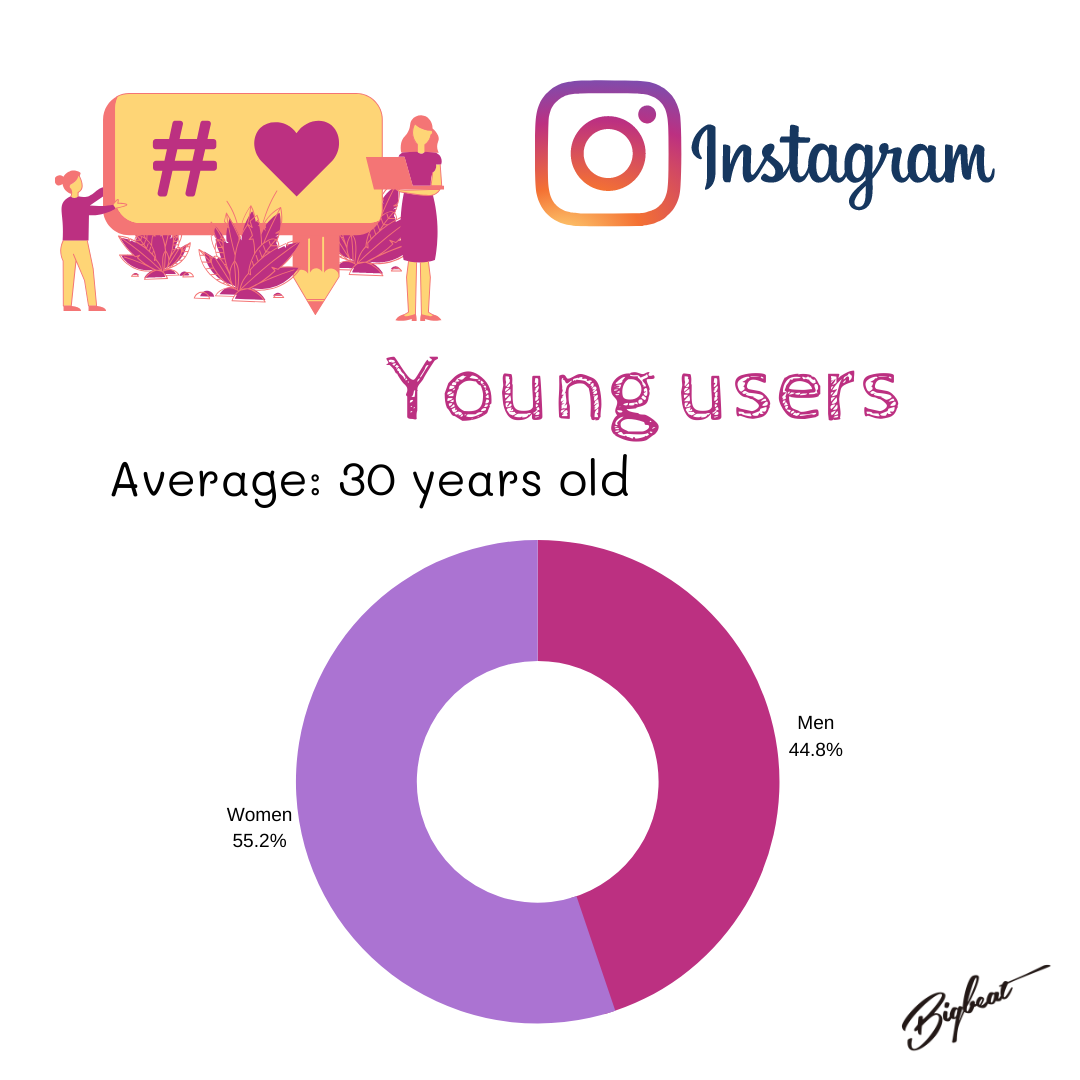 Instagram’s advertising reach is growing every quarter, registering +7.4% growth, for a total of 26% at the beginning of 2020.
Despite the young age on Instagram, more and more men keep joining Instagram, surprisingly of an older demographic. It seems like a lot of their attention is focused on automotive and entertainment.

Fashion is undisputedly the most popular content type among Japanese instagrammers, thanks to ecommerce features introduced some time ago, followed by food.

Instagram is indeed a visual social media, so, if you’re going to start to push your brand there, then you should study a very good visual storytelling.
Fashion, food, entertainment, and automotive brands do very well on the platform because their products are very visual by nature. On the other hand, B2B visual product or service, may not find very good popularity on this platform. 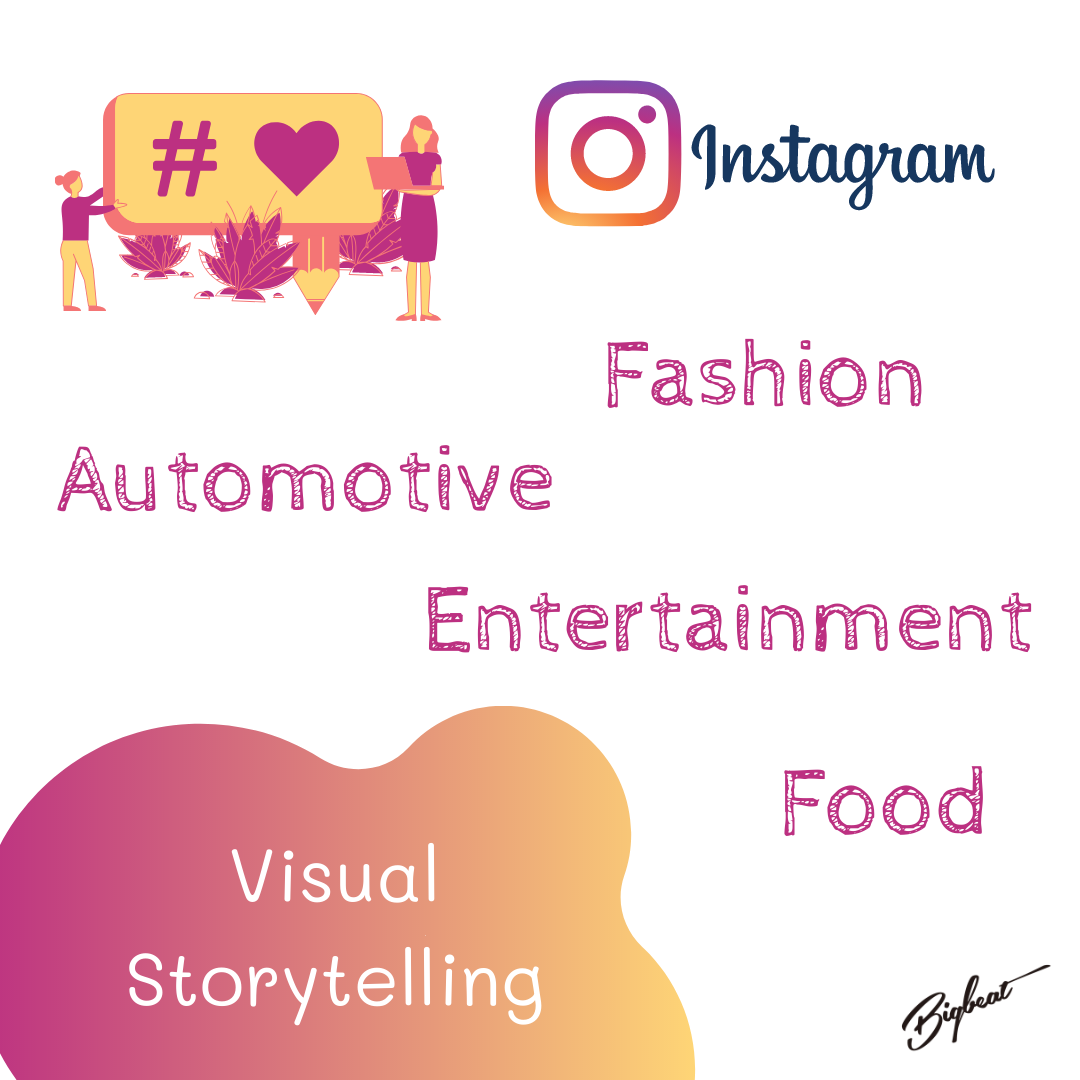 You may have never heard of LINE. It is actually more of a messenger app then a social media platform, but we thought that it is worth a mention in this article.

With its 82 million monthly active users, almost 70% of the population, LINE is the second most-used app in Japan, after Youtube. Every quarter it is said to gain 1.2% new users (i.e. 1 million users/quarter).

In 2019, LINE was been the third most downloaded app in Japan (after Paypay and Instagram), but still the first in terms of active users and time spent on app. 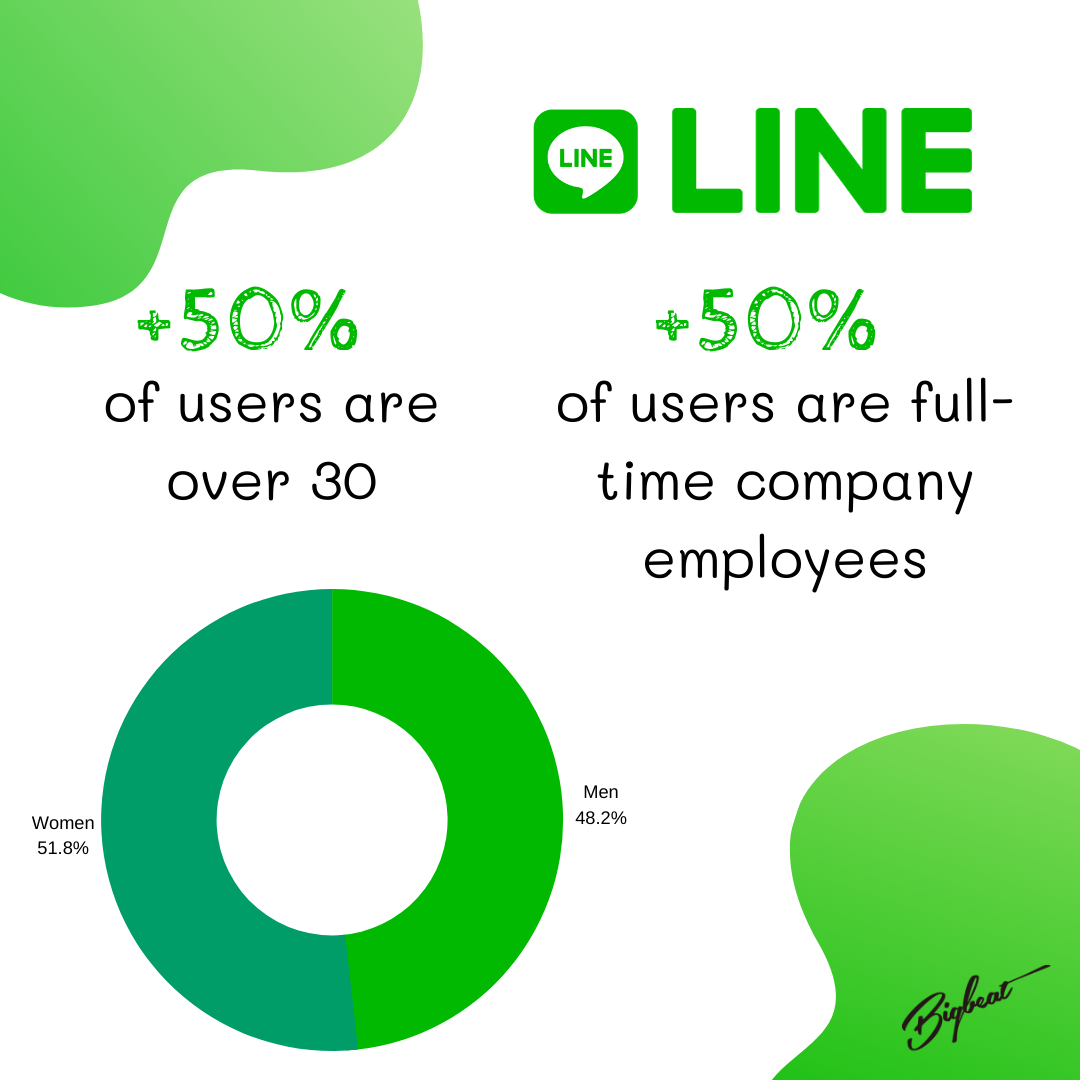 Demographically speaking, LINE is used by men and women without big differences (men:48.2%; women:51.8%), but the difference lays in the age of users: more than half of them are over 30.
Moreover, according to the data published by LINE, half of the active users are full-time company employees and only 1 out 10 is a student.

Besides the messaging feature, LINE also provides a social media function, called Timeline, similar to the newsfeed of Facebook. Here, users can post pictures, statuses, comments and so on.
However, the engagement and the time spent on the Timeline tends to go down with the age of the user.

In addition, LINE provides Business profiles, but, according to the stats, restaurants, retail shopping, beauty, automobiles, and fashion are the majority of business profiles.
Being a LINE@ Partner, you can advertise on app, using Timeline or direct messaging. This service is freemium and it could work quite well with the above written B2C industries. But we do not suggest B2B brands to invest money for advertising campaigns here. At least for now. 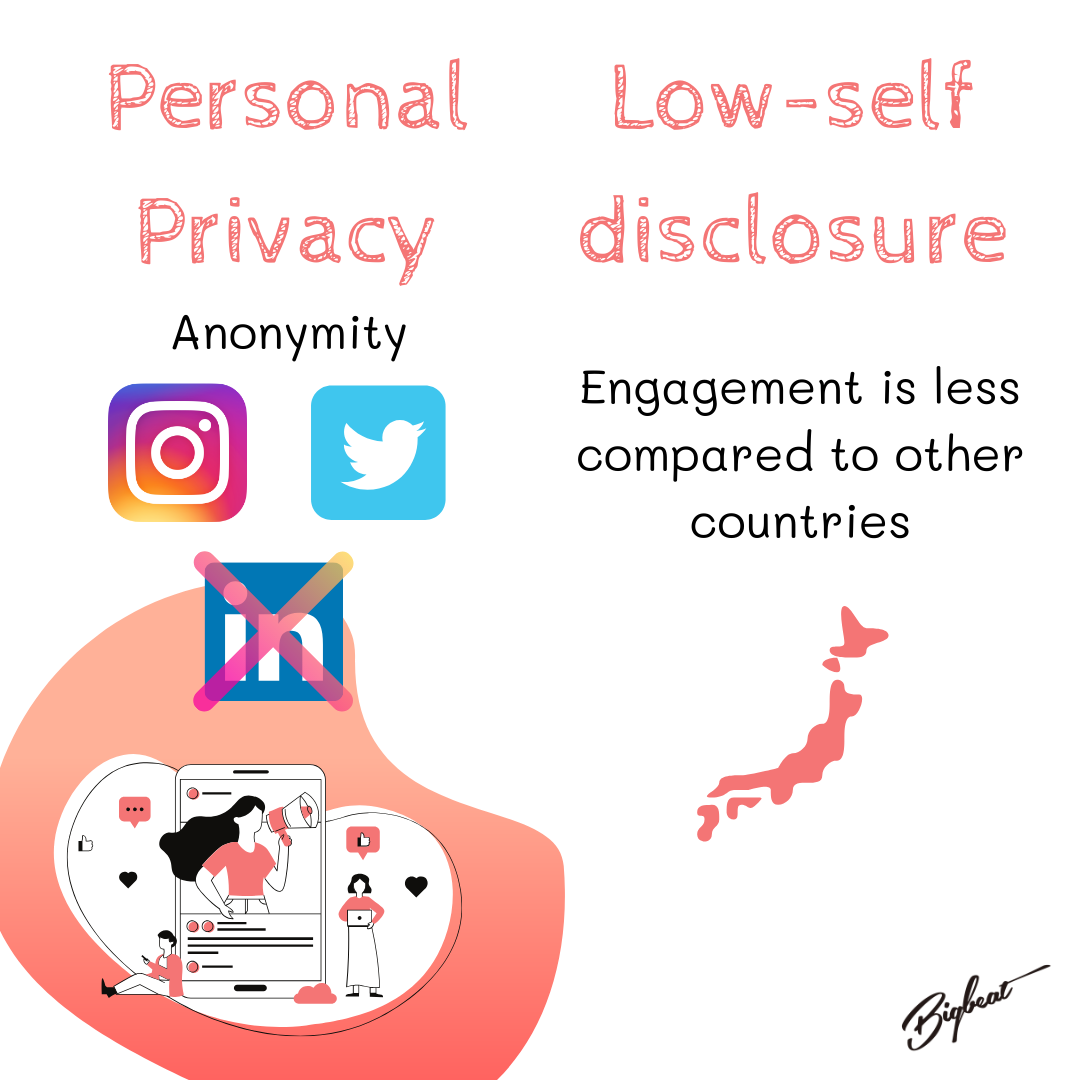 After this overview on Social Media platforms in Japan, we think it’s important to share with you some things to be aware about Japanese culture affects the use, popularity and engagement with SNS.

First of all, it is necessary to stress that personal privacy and low self-disclosure is of utmost importance in Japan. It is probably one of the crucial factors shaping the behavior of Japanese Social Media users.
This is the reason why Twitter or Instagram are dominant in Japan, because those platforms allow for much greater anonymity than LinkedIn. This also explains the great number of pseudonyms on platforms, or even the presence of multiple fake accounts.

In addition, for cultural reasons, Japanese people are not so open to showing their personal life/personal views and opinions on social media. This is the reason why, engagement on these platforms is less compared to other countries.


Bigbeat Inc. has 25 years of experience in B2B marketing. If your company is interested in developing a social media strategy, or advertising on Social media in Japan, or if you need further information or assistance, do not hesitate to contact us here!