「Going well beyond the goal」 The process that created success at the exhibition and a bold change of direction.

There were around  76,000 attendee at this year’s 「SECURITY SHOW 2019」which eclipsed last year’s attendance of only 5,000 people.
What plan do you have to create in order to successfully exhibit in the security industry where oversea companies are drastically increasing the competition? In order to find the answer to this question we talked to the people in charge of Sony Business Solutions Corporation’s booth at the exhibit. 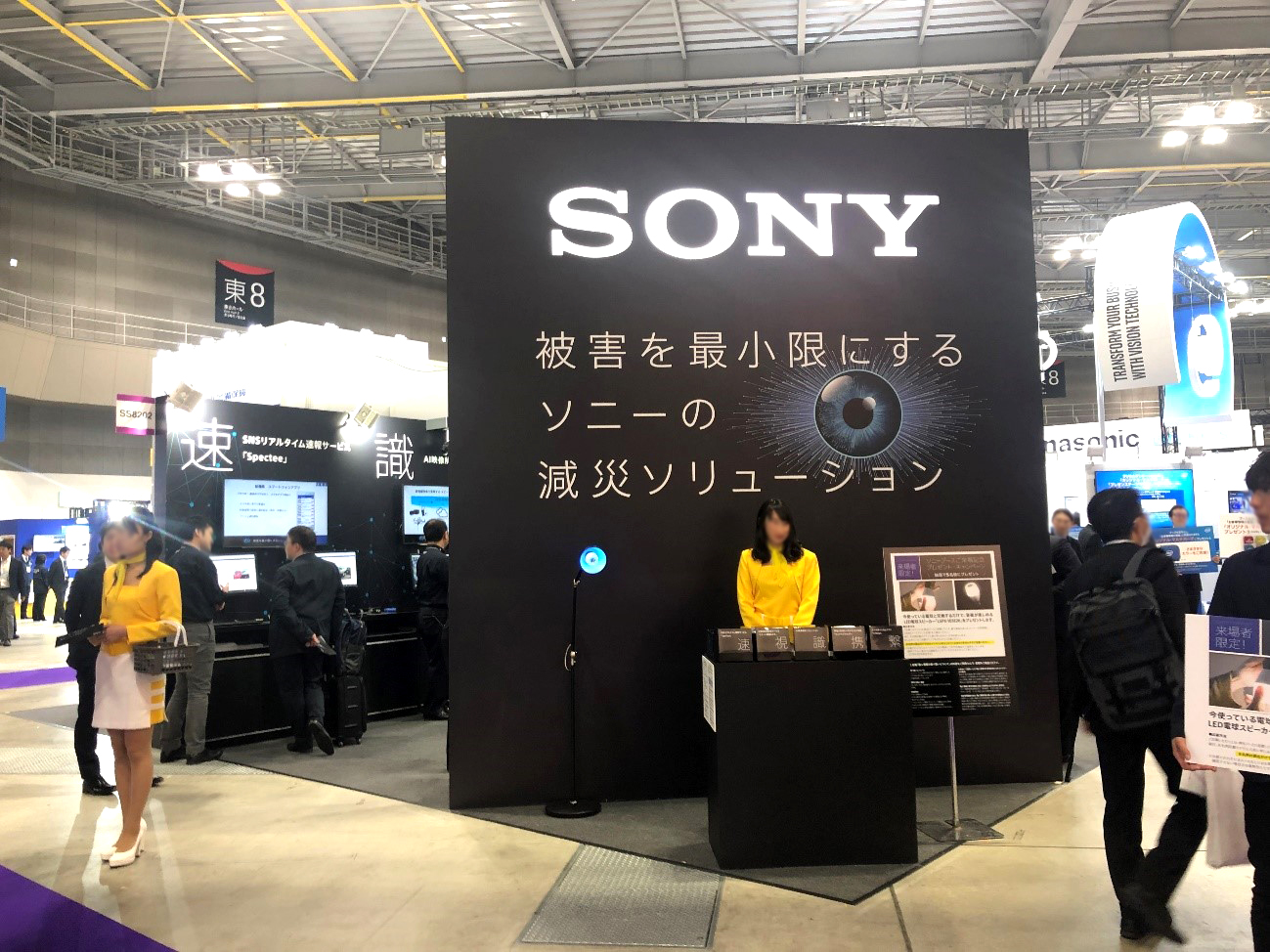 Bigbeat (BBT): Could you please tell us the contents of your exhibition booth this time around?

Sony Business Solutions Corporation (SBSC): The theme of this year’s booth was reducing the damage cause by disasters. The theme “Disaster Reduction” was proposed by Bigbeat and we thought it was good and picked it up.

Our product is a support system that quickly and efficiently detects disasters and accidents and gains a grasp on the situation.  An AI collects and analyzes posts from social media and quickly gathers correct information. The AI analyzes video taken from network cameras and compares them to past examples and prevents the damage from disasters in advance.

There is also the Smart Information Camera service available where a camera is set up in a mobile base and the information from this camera is sent to the user. 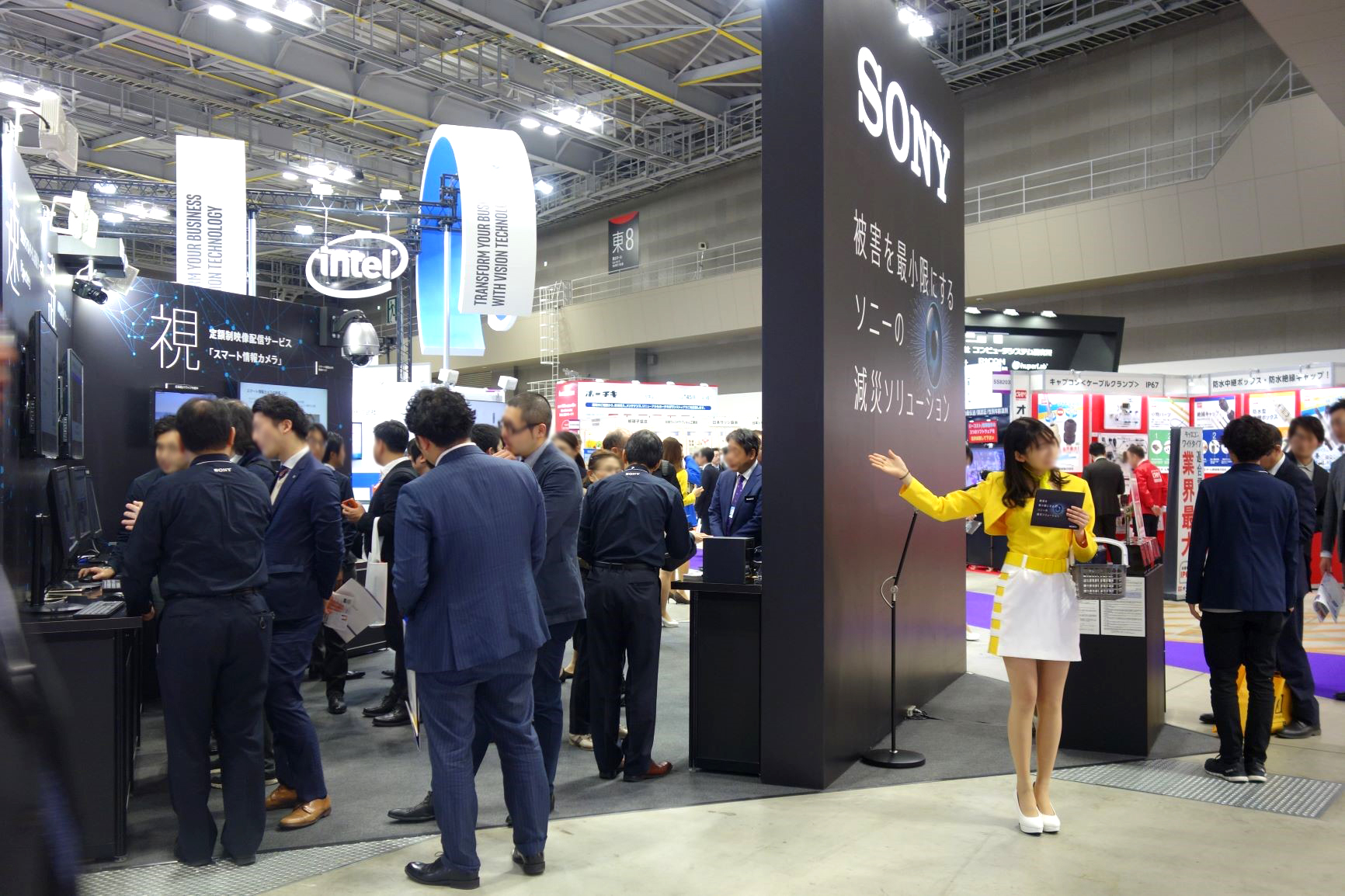 BBT: Could you please tell us the goal participating in the exhibition?

SBSC: Our goal was to acquire a certain number of leads (from business cards and customer information)

BBT: How were the results?

SBSC: Thanks to the support from Bigbeat, were able to go beyond that goal by a lot.

BBT: Were there any issues when you exhibited at the event?

SBSC: Because this time around, our company had a lot of new solutions and one issue was establishing the layout of the Sony booth because of that.
Also, this time around, it was not like we had a big booth, so we were worried about being able to draw in a lot of customers.

BBT: Where you able to solve these problems?

SBSC: Partly because of our giveaway campaign, many costumers came to our booth. We were also really pleased with the operation of our booth. It was successful.

Choosing a company that can provide total support for efficiency and a common understanding of the vision.

BBT: What was the reason you choose to work with Bigbeat?

SBSC: When we first decided to participate at the Security Show exhibition, we considered a number of companies to work with.
Bigbeat has worked to help other companies in the Sony Group succeed and we heard good things from them. So, we thought we would also try working with you. The cost performance was good as well.
Working together on things outside of the Security Show was really easy. So, we decided to also work with Bigbeat on the security show booth.

At first, we were working with another company on the production and designing the pamphlets and DMs and Bigbeat was only working on the construction of the booth. But we listened to Bigbeat talk about the booth image and understood that trying to convey that image to another company would be inefficient. Because trying to work with new companies every time takes more man-hours and costs more money, the best thing is working with a company who understand the contents and direction of the booth. But we can’t work with a company that only works on construction.

BBT: How did you proceed with configuring the booth?

SBSC: For several years now the market for network cameras has been going though big changes. Oversea makers have cameras that are cheaper than domestic ones and a wide variety in their lineup. If you just try to display traditional network cameras you will get buried by the competition.
We increased the products and solutions we showed off at the exhibition. And we changed from the network camera zone to the overall security zone.
When we decided to display off a variety of our products, we went to Bigbeat for advice on how to do that.

BBT: So, you changed the direction of the booth?

SBSC: Last year we only changed the booth a little. But this year we completely changed our booth. 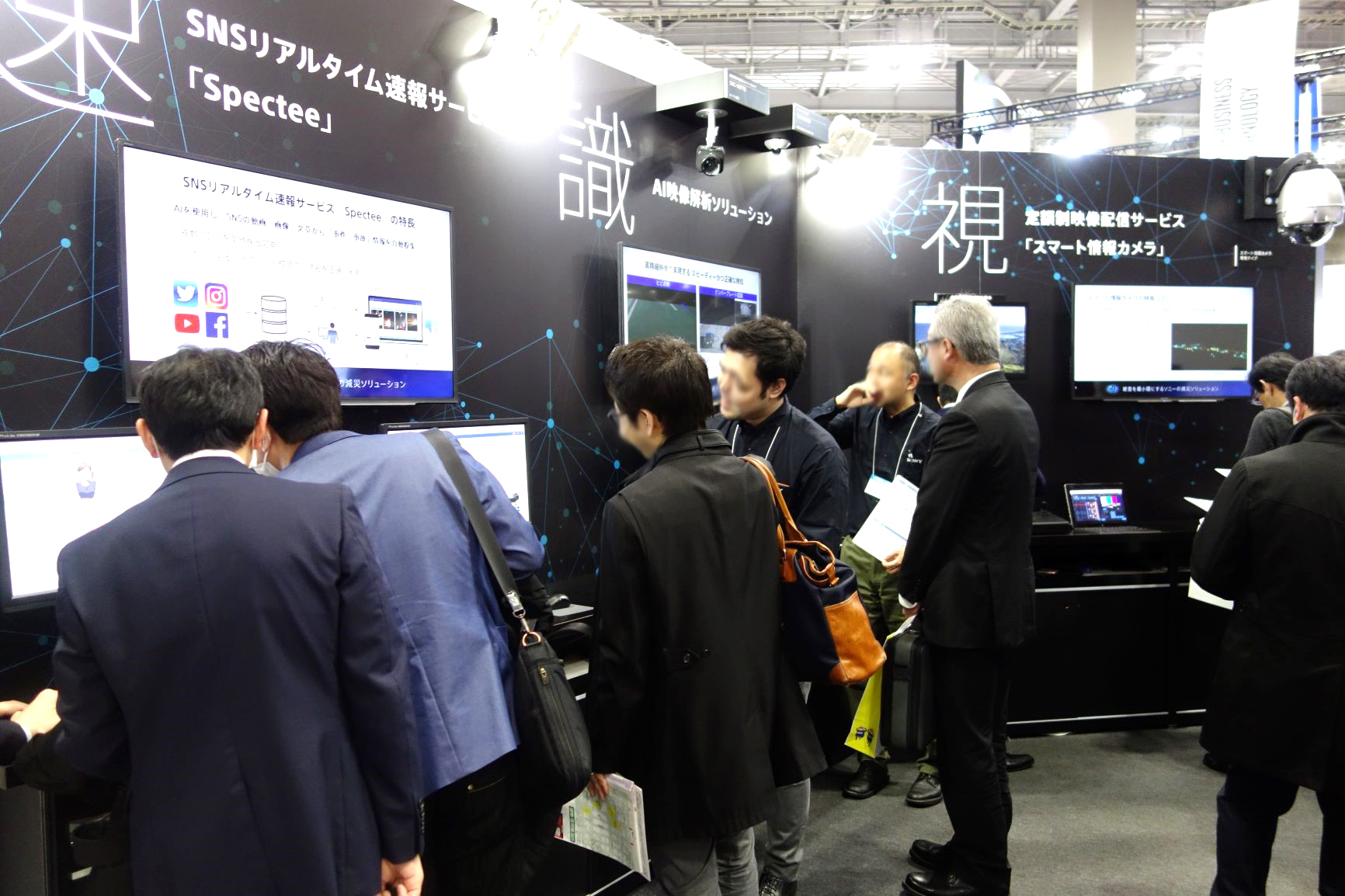 BBT:  Last year the image and the color of the booth was white. This year it completely changed to black. Bigbeat proposed the key visuals and concept in order to show off a wide variety of products.

SBSC:  The theme “clairvoyance” was a completely new proposal and I thought that it was interesting. It also had an impact.

BBT: Were people at SBSC ok with the changes in the concept and booth design?

SBSC: It’s the same as last year, but our request was “don’t do things the same way we did in the past.” We said, “we want to you be more aggressive this year.” Employees in the other departments really liked the booth too.

Aiming for a management with a sense of unity 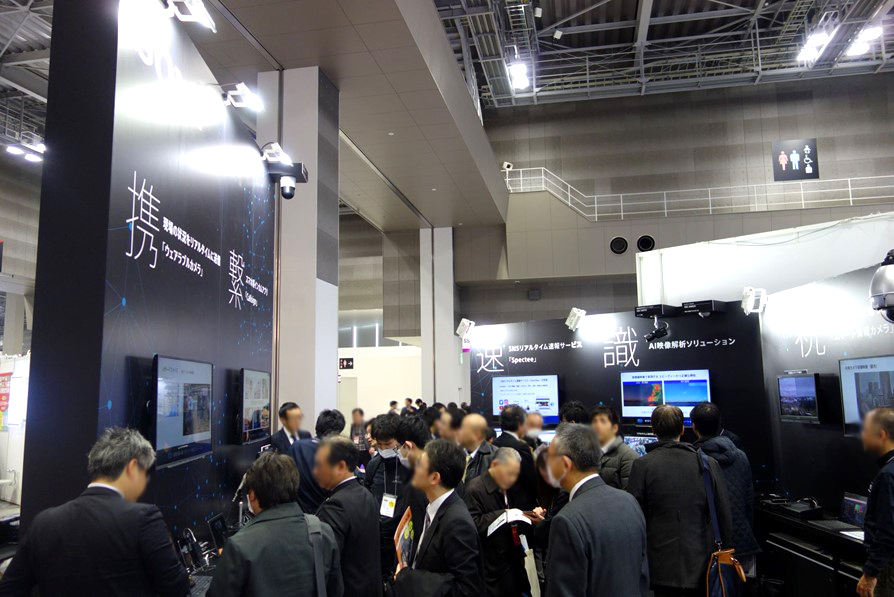 BBT: You can say the booth was a success because you were able to beat your goal of leads gathered, but do you think the booth was successful in drawing the attention of the attendees?

SBSC: I am in the position as the person in charge of events and I always think about management with a sense of unity. This time around I felt that the product explainers, management, operation staff, companions, and everyone who was at the event had a sense of unity.
It was not easy to create a system that allowed for operating the booth and attending to the customers.  But this time it was really good that we were able to work with Bigbeat from scratch to work together on this issue.

Also, we were about to get a number of good inquiries which was also a huge success. Leads are important, but it is also important to get workable inquiries. This time around we had a number of interesting things at our booth.

BBT: Have the inquiries led to any leads?

SBSC: I’ll let you know we when we close the talks. (Laughs)
Realizing of a common vision and communication.

BBT: How was the process leading up to the event?

SBSC: It was not smooth at first.
Taking products from various categories and trying to put them together is not easy. We prepared ourselves to take on the work of organizing the products into one booth.

We have worked with Bigbeat for 3 years now and you understand us. But we haven’t change everything like this before in the past and it was difficult at first.
There are things we are not strong at and where we had asked for your services. We ask for your help on the giant task of coming up with a tagline. It took a lot of time but the account director at Bigbeat worked really hard. Eventually we went with the first tagline proposed. (Laughs)

At first designing the pamphlets and handouts was difficult. But I feel because there was that process the quality of the handouts went up. Without that process, I think it would’ve taken more time. 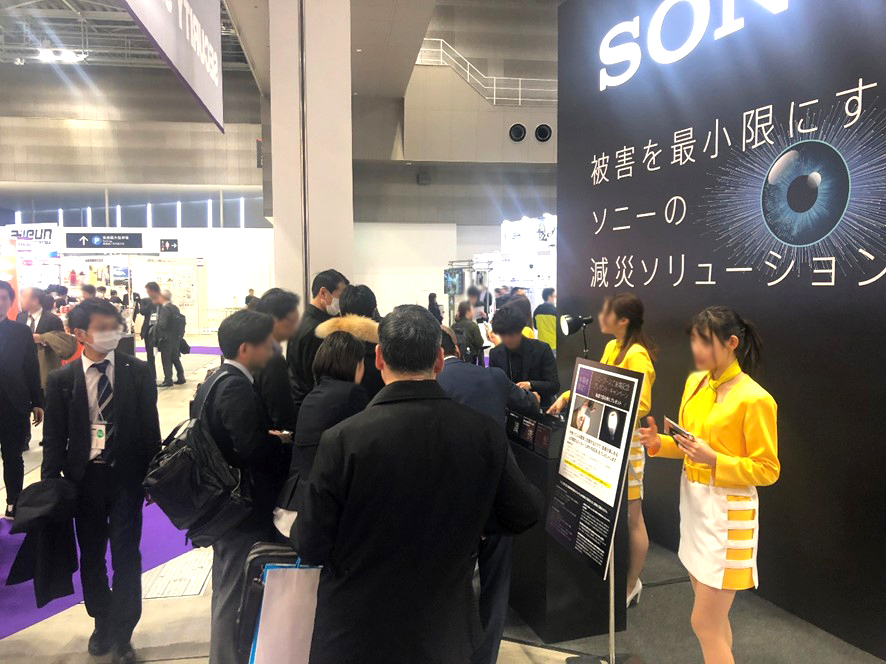 I think what was good this time was we were able to talk about and decide the kind of things we would do at our booth.
For the purpose of getting leads we had the attendees put their business cards into a voting box of which booth corner they thought was the most interesting. We came up with this strategy together with Bigbeat. We didn’t just automatically go with a proposal from Bigbeat or just ask Bigbeat to do what we want. We decided what we were going to do by talking about it together and I think it was effective.

We changed the structure and direction of the both from last year, but we decided those changes by working together and talking about it. There was a lot praise with SBSC.

BBT: Comparing this year’s booth to ones in the past, do you think it worked?

SBSC: It was prosperous in ways that we didn’t see in past booths.
I think this was the best booth since I have taken charge of the security show. In the past we bought more space and gave presentations, so we can’t compare the booths on those points, but just because we had a smaller space did not mean we couldn’t do good things with it. We changed the way we did things and it was a good chance.
In my years as the person in charge of events this the best booth so far.

BBT: It sounds like you were able to work in an environment where you could share an understanding of your vision, create an effective booth management system, and exhibit successfully.

Thank you for taking the time out of your busy day to talk with us.

Even a booth showing off the latest technology, it takes an analog process in order to convey the vision of the owner of the booth project and to get everyone involved to move in an efficient way. This analog process becomes the key for a successful exhibition.

The development of the SBSC was a challenging task, but it was made successful through teamwork and communication.

Read more about our successful case studies here and feel free to contact us for assistance!