Department Stores in the Future and “Future Standards” in Five Years

In the historical district of Yanaka in Tokyo, there is a 100-year-old house. This house could easily be looked over as another part of the historical scenery of the area, but it is actually the office of Japanese department store chain, Daimaru Matsuzakaya’s ‘Mirai-teiban Kenkyu-jyo’ (Future Standard Laboratory.)

What kind of people are drawn to work in a division that is aiming to identify and sell items that will become standard items for its customers? Why was Yanaka chosen as the location of the office?

We had a chance to interview Mr. Hidekazu Imatani, the Director of the ‘Future Standard Laboratory,’ to learn more about his unique division.

Hidekazu Imatani’s profile
After working at NOMURA Co., Ltd. and ITOCHU Corporation, Imatani joined Dentsu Inc. in 1990. Using his qualifications and experience in architecture, he worked on space design for showrooms and events. He also worked on the development of online advertisements in the very early days of the internet. He joined Daimaru Matsuzakaya in 2015 and established the `Future Standard Laboratory.’ In 2018, the office was moved to Yanaka, Tokyo. 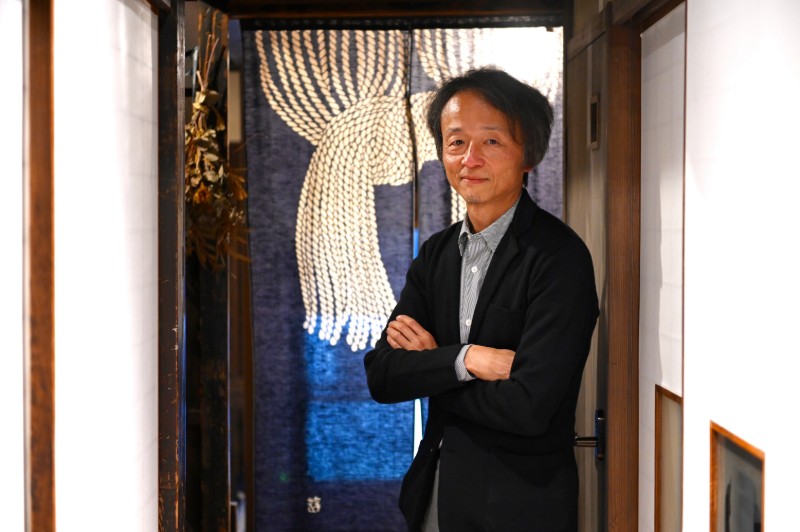 Q: In the first half our interview, we heard that the Future Standard Laboratory is a division that determines and sells items that it thinks will become standards in five years. What kind of work is done in your division?

Imatani: When we established the division, we also launched our blog, FUTURE IS NOW (F.I.N.). We use this blog to plant the seeds of things we believe will become standard in five years from now. Originally the site was launched to give our employees hints on how to stay ahead of the trends, but in-house newsletters tend to be unread by employees... (laughs)

So, we opened the site up to the public as a company blog. People worried that our competitors would use the blog to take our ideas or get information on our activities. But I thought that it would be somewhat of an endorsement if our competitors copied us.

Imatani: Although a lot of articles tend to be easy to understand for end users, we try not to write anything that directly leads to business. Instead we publish content that is slightly abstract in nature. Even with employees, it is difficult to get them to read things that are a little difficult to understand. So instead, we focus on putting out interviews that we believe will inspire new ideas and creativity.

Q: Right now, I think that there is a move to rethink what the value of a ‘department store’ is. What role does F.I.N. play in that rethinking?

Imatani: Our company has a strong tendency to be top-down, so if the president tells everyone to read a blog, everyone reads it. But to be honest, I think that many people end up reading it without really understanding the content well, because we are not writing about products that sell quickly.

For example, if you write a blog about workstyle reform, a lot of employees do not see how it connects to our business. But I want them to imagine the types of services and merchandise that will be created as a result of workstyle reform. Even if the articles are not related to services nor merchandise, people who understand would know the message we want to convey.

Take on challenges with people who share the same concerns

Q: It must be a very different task from the other divisions. What kind of people are a part of your division?

Imatani: The original six members of the Future Standard Laboratory belonged to the business planning division and were recruited by HR. But, currently, I am the only original member and the others moved out to other divisions. The newest three members were recruited internally. I believe that people who are aware of the challenges we face and come to our division on their own will are the type of people we need.

Q: What kind of evaluations are you getting from people both within and out of Daimaru?

Imatani: We get a lot of comments from people outside of the company that our division is ‘interesting.’ But many people within the company probably do not quite understand what kind of work we are doing. I think from their point of view we may even be a waste of money.

But, we have recently been getting more visits from employees from other divisions. Those who live in Tokyo can easily come to Yanaka by train, and those who live far away have come by while they are on business trips to Tokyo. I believe that if we can just meet and talk about the work we do at the Future Standard Laboratory, then people will understand the kind of work we do. In addition, since this division is under the direct control of the president, we can directly tell the president what other employees have told us or proposed to us.

Q: I know in the retail industry; short term goals are often emphasized. How are you going to convince other employees about the importance of you long-term perspective tasks?

Imatani: That is the real challenge. The profit from our current business is our resource. Hot-selling products are the source of our paychecks. That being said, there is no guaranteed future in this model. We must move forward and take on the long-term challenges without denying the need for our current practices.

Going to Yanaka to create the future 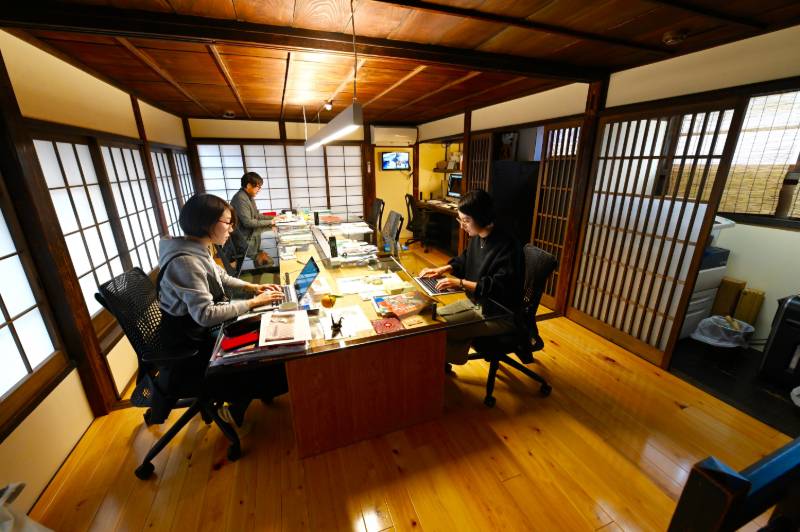 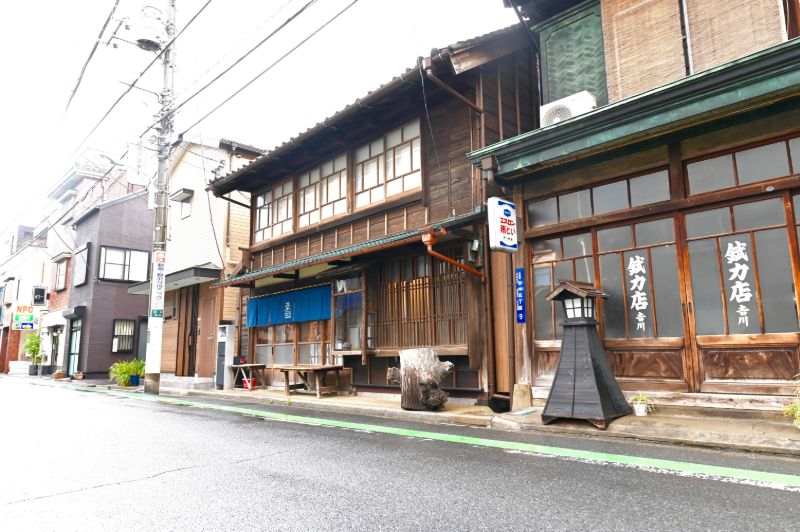 The building with the blue curtain is the office of the Future Standard Laboratory.

Q: Why did you choose Yanaka as the location of your office?

Imatani: The biggest reason is because we wanted a place that people outside of the company could easily freely come and go as well as a place separated from our HQ. If our division was located at the head office, there is a possibility that it will be overwhelmed by the eyes of management and too many people would get involved. I wanted a place where we could freely speak our minds without having to worry about the opinion of management and the other divisions.

Above all, Matsuzakaya has a history of dedicating kimonos to Kan-ei-ji Temple (a famous Buddhist temple located near Yanaka) for over 250 years. We are right in front of the temple here in Yanaka. Although it may sound as an afterthought, I feel that our intuition was correct to have chosen Yanaka, that it brought us here. There is also an impact that is brought about from the contrast of working in a very old traditional house while aiming for the future.

Q: Although it was a coincidence, you were able to set up an office where you could trace your roots.

Imatani: That's right. The modern era is one where you can easily gain access to a lot of information. But in the old days, people created new things even in the absence of information. In honor of that, I would like to utilize our old building to think about the future. 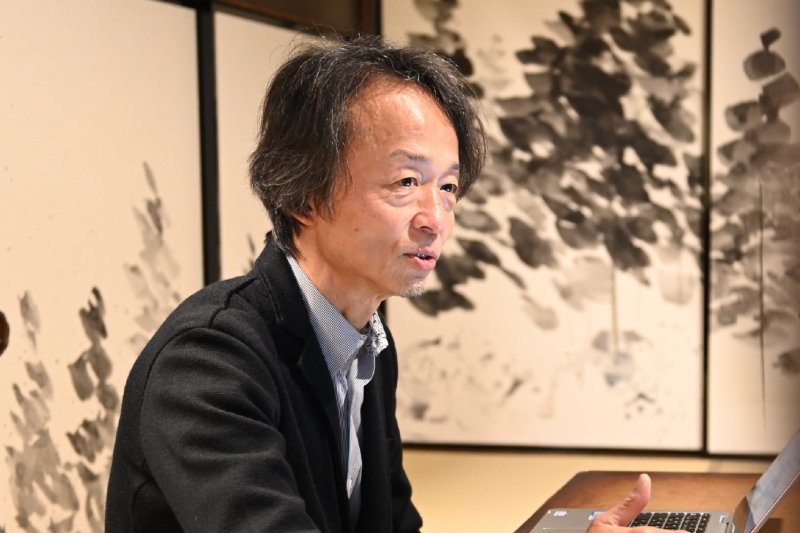 Q: Earlier, you said that to create new future standards, you cannot miss small signs and have to see the value in everything. That is quite similar to your work in the early days of the internet business?

Imatani: When I was trying to incorporate Internet advertising into my business, it was the heyday of TV. When I first saw the internet, I thought that the TV will not be needed in future, but it was too early for most people to understand my way of thinking. But after that, the age of the internet really started. What is important is not 'what people are already doing.' I really value my own intuition about something new.

Q: In order to get that intuition, you have to constantly have your radar on. I think all of the small buds of opportunity are brought on by a “diversity of values.” I really think a place where you can approach a wide variety of things is a department store.

Imatani: I believe a department store can create and nurture over 100 different values (a Japanese word for “department store” can be translated into a “store with 100 different items”). It is for that very reason that they need “value marketing.” Whether it is the space or store clerks, we need to create something that the customer will like and value. In addition to that, it may be a help if we can share our thoughts about environmental sustainability and being useful to others, it may increase empathy from customers.

It is important not to miss any small signs, but it is also important to show this attitude. More people will love stores that focus on minor and small values rather than stores that just pursue trends. In an era where there are so many diverse values, I think that is what department stores should aim for.